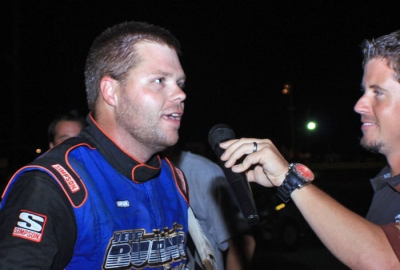 Baggett celebrated with fist pumps and hugs in victory lane for a highlight to a season marked by frustration and a split with a car owner. The 26-year-old's 50-lap victory, his first on the series, came in just his third start in a new Victory Circle Chassis.

Brian Rickman of Columbus, Miss., who struggled with his car's handling late in the race, led laps 17-48 but settled for second while 12th-starting Kyle Beard of Trumann, Ark., was third. Series points leader David Breazeale of Four Corners, Miss., and hometown driver Chad Washington rounded out the top five.

Outside front-row starter Rick Rickman of Columbus, Miss., led the first lap, but fast qualifier Ross Camponovo of Clarksdale, Miss., went ahead on lap two and stayed in control until Rick Rickman went back ahead amid traffic on lap 12.

A brother vs. brother duel developed up front with Brian wresting the lead from Rick after a lap-16 restart while Camponovo faded from contention. Baggett worked his way into the top five during a caution-filled stretch, and a lap-27 restart changed the race's complexion.

Baggett and Rick Rickman made contact entering turn one. Baggett spun in front of the field with several cars involved, but Rickman was blamed for causing the caution, restoring Baggett to second spot behind Brian Rickman.

From there, Baggett pursued Rickman, whose car picked up a push in the final 10 laps. The frontrunners staged a furious battle in the waning laps with Baggett inching ahead going to the white flag and holding on the final lap.

Notes: Baggett's Victory Circle Chassis is sponsored by Triple A Diesel Service and Henderson Waste & Recycling. ... Eight cautions in all slowed the race. ... Dane Dacus of Lakeland, Tenn., was running third when he clipped an infield tire, knocking him out of contention in the second half of the race. ... Rick Rickman's race ended in a tangle with Ray Mauldin. ... A third Rickman, father Eddie, was scheduled to start outside the front row. But he scratched because he was using Dean Carpenter's backup car, and Carpenter climbed into the car after problems in his primary machine to take a provisional starting spot. ... Carpenter made a 22nd-to-eighth charge to earn American Race Tires Hard Charger honors. ... Other drivers failing to make the feature: Stormy Derryberry, Daniel Waters, Patrick Michel and Edmond Jenkins. ... PRO drivers take a long hiatus before returning to action for the series finale Nov. 13 at Riverside International Speedway in West Memphis, Ark.