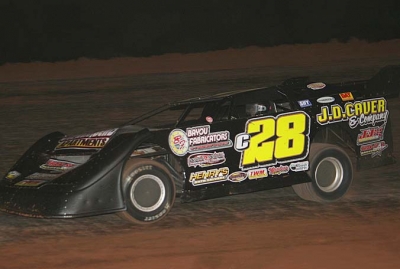 Merchant debuted a new all-black No. c28 in notching his fourth straight victory at Champion Park while Moore edged Chris Holley of Dayton, Texas, for the second spot. A pair of Minden, La., drivers — Allen Tippen and Jeff Chanler rounded out the top five.

"I don't know what I have found here," the 39-year-old Merchant said of his Champion Park success. "We used to say we hated coming over here because we always struggled and get in wrecks for whatever reason. Now it's like we broke over the hump and won one finally. Now you hate to say it or sound cocky, but it's almost like you can't lose one."

Merchant got the jump on Holley at the outset as the frontrunners pulled away from the third-running Chanler early in the race. Merchant began lapping slower cars by lap 11 and was stretching his lead on Holley when a caution for Timothy Culp bunched the field on lap 14.

The 40-lapper stayed green the rest of the way and Holley began to struggle after losing his brakes about halfway through the race. As Merchant built a comfortable lead, his only concern was traffic as Holley contended with Tippen, Chanler and Ronny Adams in a battle for second.

Moore's charge began in earnest as he broke into the top five late in the race, then took fourth from Chanler on lap 32. His high-side momentum helped Moore take third from Tippen and he set his sights on Holley in the final three laps.

With Merchant cruising out front, Holley tried his best to hold off Moore's challenge, but Moore's high side move exiting turn four coming to the checkered flags gave him second place.