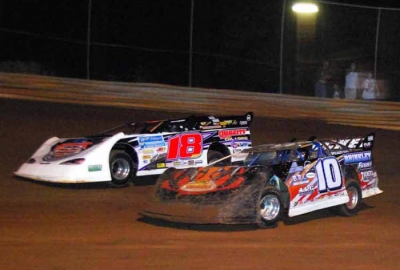 Scott Cook of Shelbyville, Tenn., rallied from ninth to finish third followed by former track promoter Tommy Lawwell of Shelbyville, who rallied from his 21st starting spot. Clint Nichols of Shelbyville advanced nine positions to finish fifth. The outside cars on the first three rows — Anthony Burroughs, Josh Putnam and Kelly Hanvey — all had flat tires in the early laps.

Tony Morris of Murfreesboro, Tenn., who entered the race leading SRRS points, was 22nd in the 23-car field after starting a borrowed car. His regular No. M31 was heavily damaged in a flipping accident in his heat race.