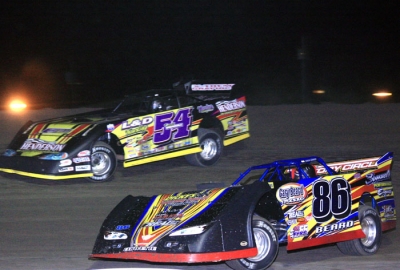 GREENVILLE, Miss. (Aug. 13) — Not even a six-week rain postponement could slow David Breazeale’s season down as he mastered an extremely slick Greenville Speedway on Friday to extend his PRO Dirt Car Series points lead and claim the Four Crown Nationals title. The Four Corners, Miss., driver led all 40 laps on the quarter-mile gumbo clay oval for a $2,000 victory, his series-leading fifth on the PRO tour. | Slideshow

David Ashley of Zachary, La., rallied from his 11th starting spot to third following a lap-eight restart, but he slipped over the turn-four berm on the 36th lap to fall from contention.

Five cautions slowed the action, all for single-car incidents in a race postponed for a race rained out on July 1.

The race was the first of a two-night doubleheader on the first-year Promoters Racing Organization. PRO competitors battle for $3,000-to-win on Saturday night.

Notes: Breazeale is sponsored by L&D Trucking and Henderson Motorsports. ... Breazeale won the Four Crown Nationals miniseries title, taking three of four events originally scheduled for the Fourth of July weekend. ... Ray Moore of Haughton, La., was scheduled to start outside the front row, but a broken spring knocked him out of the race as the field came to the initial green flag; he received the GRT Race Cars Hard Luck award. ... Other cautions appeared for Ray Mauldin (slowed on lap eight), Mark Dodson (stopped on lap nine), Patrick Michelle (spins on laps 30 and 38) and when David Ashley slipped over the banking on lap 36; Ashley ended up 15th.