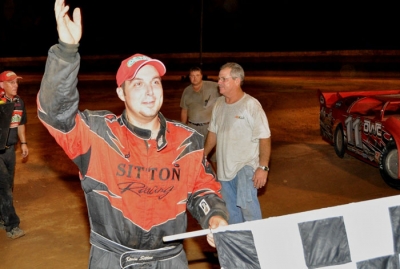 BAKER, La. (July 31) — Capturing his first series victory in 14 months, third-starting Kevin Sitton of Baytown, Texas, edged polesitter Jeff Chanler by five lengths Saturday at Baton Rouge Raceway on the O’Reilly Southern United Professional Racing circuit. Sitton took the lead on the sixth lap and held off a mad scramble behind him for a $2,500 payday. | Slideshow

"It feels real good. We have been trying all season for this, it is our first one. It is my first one here in Baton Rouge, too," the 28-year-old Sitton said. "There was a few times where I missed my marks, I was playing more defense than anything. I should have just got up on the wheel and raced and not trying to block everybody.

"I kept looking at my crew guy every time the yellow would come out and he was saying that I kept pulling away from everybody, that I had a pretty good lead. Anytime you are leading, you get worried and can't wait for the checkered flag to come out."

SUPR points leader Rob Litton of Alexandria, La., rallied from his 17th starting spot, surviving a flat tire to finish third in the 50-lapper while Allen Tippen of Minden, La., and 19th-starting Kyle Cummings of Sibley, La., rounded out the top five.

Chanler led the first five laps and hoped for a shot at Sitton late in the race, but settled for second.

"I was hoping on that last restart I would have something for Sitton, but it was all I could do to hold on to second," Chanler said. "Lapped traffic gave us a chance and I hoped it would work in our favor."

Chanler led at the outset and Sitton quickly joined him for a two-car breakaway. Sitton dipped under Chanler to take command on the sixth lap, and Tippen caught the frontrunners a few laps later.

Litton’s flat tire on the 11th lap slowed the action, and Jack Sullivan of Greenbrier, Ark., got rolling on the restart, taking third from Tippen on the 13th lap and dropping Chanler to third on lap 16.

Sullivan tried to close the gap on Sitton, but a tangle with the lapped car of Paul Joyner on the 17th lap knocked Sullivan out of the race.

With Sitton pulling away on the restart, it was Robbie Starnes of Baytown heading for the front. He briefly took second from Chanler while Cummings, Litton and Tippen also battled for top-five spots.

Sitton had a slim lead on Chanler at the lap-30 mark, while Litton moved up to third, overtaking Tippen and Cummings, who struggled after breaking a shock mount. Sitton had a comfortable lead when the final caution flew for a stalled Chris Holley on the backstretch on lap 37.

The race went green the rest of the way with Sitton negotiating traffic well enough to wrap up the victory.

Notes: Sitton's Rocket Chassis is powered by Jay Dickens Racing Engines and sponsored by Tony Flynn Racing, Pro Plumbing & Construction, Best Auto Parts, Ed George Racing, Performance Race Engineering and VP Racing Fuels. ... Sitton’s fifth career series victory ties him with active drivers Kyle Cummings and Bubba Mullins on the all-time list. ... Sitton's previous best finish at Baton Rouge Raceway was second in October 2008. ... The checkered flag flew on the 33-minute feature at 12:20 a.m.; 16 drivers were running at the finish, all but one on the lead lap. ... Six cautions slowed the feature. ... The race was the 78th SUPR event held at the quarter-mile oval. ... Rob Litton was the hard charger of the event, going from 17th to third. ... Litton increased his points lead to 109 over Kyle Cummings. ... David Ashley was the recipient of $1,000 off of a new GRT Race Car by being the 10th-place finisher. It was sponsored by Triple A Diesel and Joe Garrison of GRT Race Cars. ... Jay Brunson of Dubberly, La., flipped his no. 23B car four times, after hitting the backstretch wall in a heat race. Brunson quickly emerged from the wreckage uninjured. ... Other drivers failing to make the feature: Rick Aime, Jim Bryant, Mark McWilliams, Eric Neal and Hank Schlindwein. ... SUPR drivers return to action Aug. 14 at Champion Park Speedway near Minden, La.