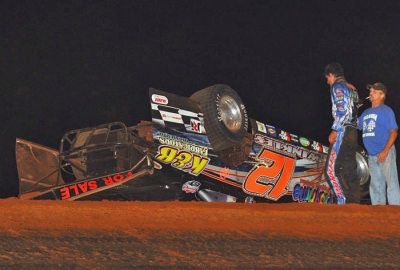 Chad Winkles checks out his car on lap 36. (dt52photos.com)

EASTABOGA, Ala. (July 31) — There’s few races Ronnie Johnson of Chattanooga, Tenn., enjoys winning more than the Michael Head Jr. Memorial. And he certainly gets a lot of practice at it, winning again Saturday at Talladega Short Track for his third victory in the Southern All Star-sanctioned event in the past four years and fourth time overall. | Video | Slideshow

Johnson started fourth, jumped into the lead on the outside in the early laps and cruised to a $5,400 victory at the third-mile oval for his series-leading 61st career triumph in the 13th annual event.

"Mike (Head) and I have been very good friends for a lot of years and we've had our share of on-track battles, too," Johnson said. "I can remember when his son Michael was coming to the tracks with him and helping to work on the race cars, and this race has always meant a lot to me. Winning it four times is even more special."

Johnson was modestly challenged on restarts but otherwise built half-straightaway leads throughout the 54-lapper in grabbing his second series victory of 2010.

"It was a bit uneventful out front, to be honest, and you can tell because we don't have any dents, no bumps and scrapes, nothing's bent, there ain't no mud splashed on the car and there's no oil leaks ... and we got a win on top of that," the Hall of Fame driver said. "It was just a good night for us. We got a little advantage and we were able to maintain it, and that's pretty unusual for here. Usually you've gotta race somebody hard to win one at this track."

Johnson left the racing to all the competitors chasing him, and it was hot and heavy at times among the rest of the field with as many as a half-dozen drivers bidding for the second spot.

Reigning track champion Tim Busha of Boaz, Ala., took the runner-up spot from polesitter Stacy Holmes of Munford, Ala., with six laps remaining to finish second, while Holmes settled for third.

"We started 11th and I'd like to have had another caution," Busha said, "but Ronnie was a little better than me up off the corners, I think. I'd used up a good bit of my stuff by the time I got there, and probably didn't have enough left for him."

Holmes, who ran second most of the race, made a few low-side challenges on restarts but knew he was racing for second.

"I had about a corner's length of wheelspin and that's where he had us covered," Holmes said. "He was the class of the field, no doubt. I'd try sneaking in the corner underneath him on the restarts, but that was more to make it interesting than anything else. His car was straight as an arrow tonight, and I didn't really have nothing for him."

Terry Smith of Oxford, Ala., was fourth and Dingus Griffin of Alexandria, Ala., who ran as high as third, rounded out the top five.

Five cautions slowed the action, including on lap 36 when Chad Winkles took an ugly tumble and his No. 12 ended up on its roof. He wasn’t injured.

Johnson was already out front when Tim Roszell and Earl Smith tangled in turn two on the sixth lap, and Mike Hill spun on the ninth lap in turn one. Other cautions appeared for Roszell’s lap 18 spin and on lap 32.

Notes: Johnson's MasterSbilt Race Car is sponsored by Miller Bros. Coal, Simmons Lawn Care, Koontz Plumbing & Construction and Vinson Racing Engines. ... Southern All Star points leader Randy Weaver has been driving for Junior Weisgarber’s owned team throughout the season, but with Weisgarber selling out his equipment, Weaver entered at Talladega in the Bob Harris-owned No. B1 he’s driven sporadically in recent years. Weaver started outside the front row and finished eighth. ... With a date at Toccoa (Ga.) Speedway recently removed from the schedule, series competitors take a four-week break until Aug. 28 action at Magnolia Motor Speedway in Columbus, Miss., for a $5,000-to-win event.