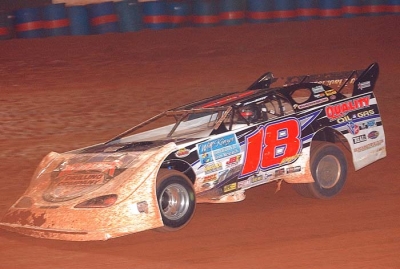 GLENCOE, Ala. (July 30) — In the late stages of Friday’s Southern Regional Racing Series race at Green Valley Speedway, it appeared Brandon Kinzer of Allen, Ky., would be a distant runner-up to Ronnie Johnson of Chattanooga, Tenn., who streaked to a huge lead at the 3/8-mile oval. But when Johnson’s machine began hobbling around the track with a broken rear axle in the waning laps, everything changed. | Slideshow | Video

Kinzer quickly closed on Johnson, driving easily past the Hall of Fame driver for a $3,000 victory while Johnson was overtaken by seven more drivers.

"Stuff like that don't happen to often and I hate it for R.J. because he was way better than everyone else," Kinzer said. "He was really cruising. You always think a caution might come out in those situations to help you catch up, but I'd pretty much conceded that one and figured we were gonna run second."

Robert Gant of Pisgah, Ala., rallied from 15th to finish second and 17th-starting Montana Dudley of Phenix City, Ala., was third. Kelly Hanvey of Cullman, Ala., and Ray McElhiney of Pulaski, Tenn., rounded out the top five in front of a light crowd.

Johnson, gunning for his fourth SRRS victory of the season, nursed his car home in ninth.

"The axle just snapped without much warning, which is what usually happens when you break one," Johnson said. "I knew we had a pretty good lead and it was probably pointless to stay out there trying to finish, but we did. That's just part of racing. There ain't much you can do about it."

Early in the race, polesitter Jake Knowles of Tyrone, Ga., and the fifth-starting Johnson battled side-by-side for the top spot. Johnson took command exiting turn two on the 14th lap, but that pass was erased by a caution.

When Johnson worked his way into the lead again on lap 17, Knowles tried to answer the move and spun in turn four, knocking him from contention (he ended up sixth). From there, Johnson dominated until his late-race demise.

Among cautions was a lap-two accident in turns three and four that involved several cars, including Dudley, who recovered to finish third. Top contenders Tim Busha and Jay Brinkley were eliminated in the early incident.

Kinzer had his problems after being involved in an incident that bent his car's left-side sheet metal and slightly damaged a header pipe. The rearranged sheet metal directed hot air into the cockpit on a very humid evening, and Kinzer was visibly tired when he climbed from his car in victory lane.

"(Josh Putnam) spun and I went sliding in there and someone else hit me in the door," Kinzer said. "It bent the sheet metal toward me and the rest of the night, the hot air from the exhaust was running right up under my butt cheek. It was a lot warmer than I needed it to be."