Adams grabs 35th SUPR victory but first at I-30 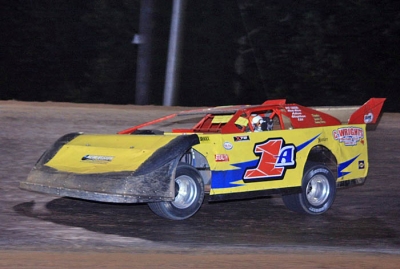 Ronny Adams steers toward victory Saturday at I-30. (Best Photography)

LITTLE ROCK, Ark. (July 24) — Veteran Dirt Late Model racer Ronny Adams of Greenwood, La., has won a lot of races at a lot of tracks, but the 59-year-old driver entered the 2010 winless at I-30 Speedway. But after plenty of second- and third-place finishes at the track nicknamed Hammer Hill, Adams broke through Saturday with a dominating victory on the O’Reilly Southern United Professional Racing tour. | Slideshow

"I thought I had one last year and Kenny (Merchant) come driving around me with two or so laps to go, and we was disappointed about that then," Adams said after earning $2,500 for his 40-lap victory. "This makes up for that a little bit."

Adams took the lead from Chris Holley of Dayton, Texas, on the 14th lap and repeatedly drove away from the field, eventually taking the checkers more than two seconds ahead of Holley at the quarter-mile oval that took rubber.

"We seen the track was getting really dry in the heat races and this track is not real bad about taking rubber, but it will do it," Adams said. "We chose right tonight (on tires). We knew it was going to take rubber, so we took tires and setup that was going to work really well under these conditions for me and a rubber-down track."

Adams made plenty of adjustments on his MasterSbilt Race Car for Saturday after his 16th-place finish in the first night of SUPR’s weekend doubleheader at I-30.

"Well, I call it wholesale slaughter," Adams joked. "We didn't do so well last night. We done a lot of bar-changing, I changed bar angles, bar links and I changed the bite I was running in the car. We also changed the spring rates and, of course, every shock on the car."

The changes paid off as Adams appeared unbeatable once he took the point from Holley. Coupled with great restarts the last three cautions, Adams was able to pull away at will en route to victory.

"We went with a little softer tire tonight. We didn't think the track was going to rubber up, so that long green flag run kind of killed us and ate that right rear up," Holley said. "I am happy with second with the group of guys that came here tonight for sure."

The race required two starts after a three-car mishap in turn two on the first lap. Front-row starter Nicholas Brown’s wreck sent Jack Sullivan of Greenbrier, Ark., into a tire barrier while Adams got by mostly unscathed.

On the next start, Holley made a daring move coming off turn two, splitting the cars of Davis and Brown to take command. But three laps later, the yellow flag appeared again for a five-car pileup in turn four involving Dustin Hyde, Josh Danzy, Jody Prince, Timothy Culp and Brown. Brown's mangled car was towed away.

When the race resumed, Holley maintained his lead while Adams took the runner-up spot from Davis on the seventh lap. Adams quickly pressured Holley as the pair made contact a few times, racing side-by-side for the top spot on lap 10. Holley held his ground a few more laps before Adams took command.

Holley slipped into at battle with Texans Robbie Starnes and Kevin Sitton as Adams built a five-second lead midway through the race. Sitton briefly took second from Holley, but he eventually spun in turn two on lap 30. Sitton elected to retire rather than restart on the rear while Holley held onto second.

The final caution on lap 36 gave Holley one more shot at Adams, but the veteran pulled away once again for his first victory at I-30 — but 35th of his SUPR career.

"It feels good" being fourth on the all-time SUPR victories list, Adams said with a laugh, "but I got an advantage on the others, because I have been doing this a long time."

Notes: Adams drives a MasterSbilt by Stuckey powered by a Robert Nealy engine and sponsored by C. Wrights Machine Tool, New Vision Graphics, Jimmy Carl & Jackie Oney and Nealy & Associates. ... Adams has two SUPR victories in 2010; the first came May 28 at USA Speedway in Sterlington, La. ... Adams won his first SUPR event in the first series season in 1990 at his home track, Boothill Speedway. ... The checkered flag flew on the 35-minute feature at 10:55 p.m.; the race was slowed by six cautions. ... Kyle Cummings of Sibley, La., was hard charger of the race, going from 17th to seventh. ... Rob Litton increased his series points lead to 96 points over Cummings. .... Little Rock fans had an outpouring response to home-state driver Jack Sullivan's "Brave The Shave" campaign, donating $1,200. Sullivan is one of 21 drivers in a cancer research fundraiser organized by Michigan driver Jeep Van Wormer’s team. The drivers will shave their heads as part of the fund-raiser, which culminates Sept. 9-11 at Eldora Speedway’s World 100 in Rossburg, Ohio. For more information, visit ahead4acure.com. ... SUPR ran its 55th event at I-30. ... The track drew 106 race cars overall in five classes along with a packed crowd. ... SUPR drivers failing to make the feature: Doug Begnaud, Wendall Bolden, Jay Brunson, Wesley Crutchfield, Paul Joyner, Skip O’Neal and Mark McWilliams. ... The series returns to action July 31 at Baton Rouge Raceway in Baker, La.