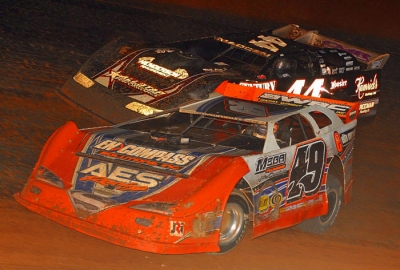 Davenport came out on top Saturday at high-banked Tazewell Speedway in a tight duel with Chris Madden of Gray Court, S.C., over the final 10 laps as the feuding drivers who tangled controversially two nights earlier treated fans to an exciting finish. | Video | Slideshow

The polesitting Madden led 41 laps before the third-starting Davenport slipped by amid traffic, then the frontrunners swapped slide jobs on laps 50 and 51 before Davenport sealed his title-clinching victory in the 53-lapper, earning $5,300.

"I’ll tell you what, thanks to Madden there. He really raced me clean. He got held up there through lapped traffic and I took my chances when he did," Davenport said in victory lane. "He slid me me (in turn three) and I just had one shot — I didn’t even know it was only two to go. I was just sitting there riding behind (a lapped car) and he kind of surprised me when he came through there. Wow. That’s the way we’re supposed to race right there."

The drivers who had crew members penalized following a collision-triggered fight in the pits Thursday at Cleveland (Tenn.) Speedway were both complimentary after the stirring duel.

"We had a great car and an eight-car lead at one point, but a lapped car probably cost us the race. One car was giving me fits," Madden said. "We just lost the race, that's all. I don't think the fastest car won the race, but that's the way it goes, sometimes. We both raced really hard out there tonight."

Outside front-row starter Billy Ogle Jr. of Knoxville, Tenn., held the third spot virtually all race long while Shane Clanton of Fayetteville, Ga., and Rick Rogers of Knoxville rounded out the top five finishers in the conclusion of the 10-race, two-week series promoted by North Carolina driver Ray Cook.

Madden led from the outset and kept Davenport at bay through the bulk of the race, slowed by three minor cautions between laps 12-14.

With the last 39 laps run under green-flag conditions, Madden was forced to negotiate lapped traffic, and that traffic gave him fits at times, including on lap 41 when Davenport slipped underneath the leading, pinning him behind a slower car.

Madden tried to answer Davenport’s move the next several laps, and when Davenport was hindered by a slower car, he took advantage so slide up and under Davenport in turn three and lead lap 50. But Davenport quickly produced his own slide job on the other side of the racetrack,ï¿½ leading lap 51 and wrapping up the victory as fans stood and cheered the final laps.

"We were about the same speed, but during that long stretch of green-flag racing, I just tried to keep my right-rear tire cool and wait until we got in lapped traffic," Davenport said. "My car could go to the bottom a little better, and I think that was to our advantage. We were a little more maneuverable.

"It was definitely a lot of fun, that's for sure. When you can race hard like that at a place that's this fast and this tight. ... we should be able to race like that everywhere."