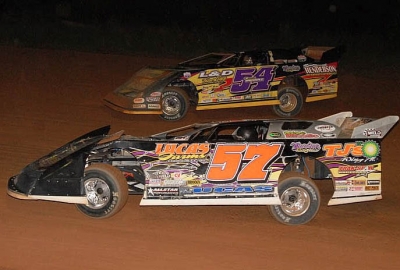 Shep Lucas of McKenzie, Ala., moved to the lead from the outside pole over the polesitter Breazeale on the start of the race. The 3/8-mile race track isn’t known for having an outside groove, but Breazeale made the top work when he pulled alongside Lucas on lap six of the 50-lap race. Lucas, who won the tour’s previous race at Southern, made heavy contact with Breazeale as he went by, but both drivers were able to continue on with minimal damage.

Lapped traffic was Breazeale‘s only obstacle for the remainder of the event, as Lucas began to fight off challenges for the second position. Sixth-starting Joseph Joiner of Milton, Fla., first challenged Lucas for the position, pulling alongside a number of times before dropping out of the race with suspension problems.

Chad Thrash of Meridian, Miss., next challenged Lucas, but his run ended after the two made heavy contact when Thrash attempted to pass Lucas on the high side after a mid-race restart.

Breazeale avoided a few close calls in traffic to claim the win by nearly a straightaway, as Lucas held on for the runner-up finish. Keith Miller of Sumrall, Miss., finished third, followed by Steve Bryan of Collinsville, Miss., in fourth and Jason Phillips of Milton, Fla., in fifth.

Notes: Breazeale’s No. 54 is owned by Leon Henderson and is sponsored by L&D Trucking … Breazeale has won four of the series seven races in 2010 … The top series rookie, Shannon Lee of Lumberton, Miss., finished sixth. The other two rookie contenders, Leon Henderson and Joseph Joiner both failed to finish … Phillips was forced to start at the tail end of a consolation race after his car lost oil pressure on his first lap of qualifying … Cody Smith and Clint Holmes failed to make the feature event. ... The series moves to Jackson (Miss.) Motor Speedway on Saturday for another $2,500-to-win event.