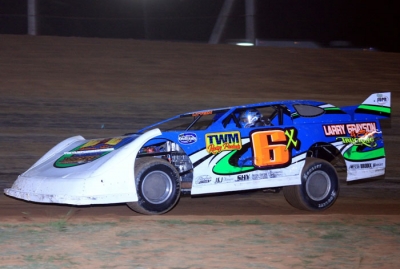 LITTLE ROCK, Ark. (July 23) — Series points leader Rob Litton of Alexandria, La., won a lead-swapping duel with Jack Sullivan of Greenbrier, Ark., over the final laps Friday at I-30 Speedway for a victory in the opener of a weekend doubleheader on the O’Reilly Southern United Professional Racing series. Litton earned $1,250 for the 25-lap victory at the quarter-mile oval. | Slideshow

With his second series victory of 2010, Litton protects his slim points lead over 10th-starting Kyle Cummings of Sibley, La., who finished third. Fifth-starting Jeff Chanler of Minden, La., wound up fourth and David Ashley of Zachary, La., rounded out the top five.

"It was a good battle there at the end," Litton said. "There on that last caution, my crew gave me a signal and I knew I had to muscle it. Whenever Jack got by me there with the laps winding down, I said to myself, ‘It is time to get up on the wheel.’ "

"It was nice to get the win, I would like to get a stronghold on this place like (Ashley) did the last time (SUPR) was here and maybe get a win tomorrow night. We will probably change to a harder tire and tighten it up, because I suspect it will be drier tomorrow with more cars and wear running on it."

The third-starting Litton raced out to the lead at the green flag over polesitter Clay Fisher of Dewitt, Ark., with Jody Prince, Chanler and Sullivan trailing, but the night’s first caution flew for Allen Tippen on the straightaway after one lap completed.

Litton took charge again on the restart while Prince gained second from Fisher. Litton expanded his lead by the fourth lap while Cummings moved into the top five as Fisher continued to fade.

Litton began driving away from the pack, increasing his lead by nearly four seconds while Prince and Sullivan battled for second. Sullivan gained the upper hand, taking the position on lap seven, but a caution for Wendall Bolden’s spin reset the field with Prince in second. Sullivan, though, made quick work of Prince on the restart and was chasing Litton when the final caution appeared just past the halfway mark after Ronny Adams and Lee Davis made contact on the backstretch; Alex Ashley spun to avoid the accident.

With seven laps remaining, Litton, Sullivan and Cummings broke away from the field with Sullivan drawing to within a few lengths of Litton on lap 19. Sullivan slipped ahead to lead lap 20 by a nose, but Litton went back ahead on lap 22 and led the rest of the way.

Litton’s two-spot advantage over Cummings helped in his quest for his second series championship with a dozen races remaining.

"I don't like getting out there and points racing," said Litton, who has an 82-point margin. "But Kyle got us last week (at Devil's Bowl Speedway) by a few spots. I know this win tonight was important in that. Don't think we all are not watching it."

Notes: Rob Litton's Rocket Chassis is powered by Wall 2 Wall Performance Engines and sponsored by Larry Grayson & Son Trucking, TWM Racing Products, Stuckey Racing Enterprise, LMS Truck Center and Litton Motor Sports. ... Litton claimed his 21st career series victory, elevating him into sixth on SUPR's all-time list. ... The victory was Litton's second series victory at I-30; he also has three straight top-five finishes on the SUPR tour at Little Rock. ... Jack Sullivan, a crowd favorite at I-30 Speedway, was back in action after his recent completion of the UMP Dirtcar Summernationals tour, where he won twice, made 27 of 28 features and finished sixth in points. ... The checkered flag flew on the 18-minute race at 10:26 p.m.; the race was slowed by three cautions. ... Robbie Stuart of DeRidder, La., made it into the feature, but experienced valve problems following his heat race. Stuart borrowed Skip O’Neal’s machine for the feature and finished 18th. ... David Ashley of Zachary La., who swept June 18-19 SUPR action at I-30, tangled with Clay Fisher exiting turn four battling for the lead in a heat race. Ashley dipped low to avoid contact with Fisher, sending his car squirrelly down the frontstretch. Ashley narrowly avoided hitting the frontstretch wall head-on. He ended up fifth in the main event, rallying from his 11th starting spot. ... Jon Mitchell of Texarkana, Tex., was black-flagged for rough driving in his heat race after a incident with Rusty Cummings. Mitchell took a provisional for the feature and was the biggest mover in the top 10, improving 12 spots for an eighth-place finish. ... Kyle Cummings rallied from 10th to finish third. "We came up there pretty good to make it an interesting battle, but we just fell short on tires tonight," Cummings said. ... Drivers failing to make the feature: Jay Brunson, Wesley Crutchfield, Paul Joyner and Skip O’Neal. ... SUPR competitors complete the weekend with Saturday’s $2,500-to-win main event.