Davenport rules the Gap, closes in on series title 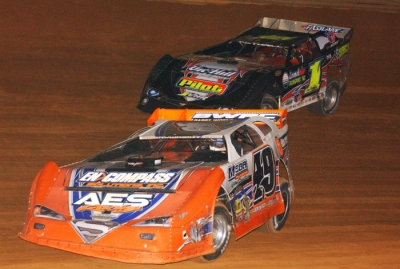 The polesitting Davenport, who earned $5,300 and stretched his points lead, took the checkered flag a half-straightaway ahead of Chris Madden of Gray Court, S.C., for his second 2010 series victory and third of his career. | Schedule | Slideshow | Video

"It really was an awesome night for us," said Davenport, driver of the Cowpens, S.C.-based Barry Wright house car. "We got here and had a fast car from the start. We didn't have to change nothing, just made a minor adjustment and bolted some tires on it. We've had a great car all week."

Davenport, who collided with Madden on Thursday at Cleveland (Tenn.) Speedway on the 12th lap in a battle for second, edged away at Volunteer after the fourth and final caution flag on the 45th of 53 laps.

The eighth-starting Madden vaulted toward the front early in the race, taking third from Billy Ogle Jr. of Knoxville, Tenn., just before Jeff Maupin of Greeneville, Tenn., produced the first yellow of the night when he stopped in turn two on the 17th circuit.

Running third with eight laps remaining for the final restart, Madden rolled second-running Vic Hill of Mosheim, Tenn., between turns one and two, but he couldn’t catch Davenport in the final laps.

Hill finished third behind Madden with Ogle and Shanon Buckingham of Morristown, Tenn., rounding out the topf ive.