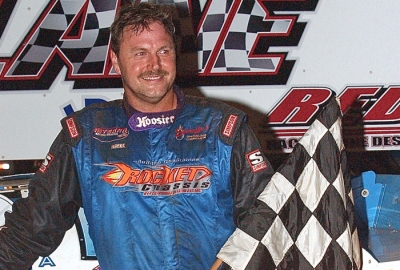 CLEVELAND, Tenn. (July 22) — Clint Smith of Senoia, Ga., won a dramatic side-by-side duel with Chris Madden of Gray Court, S.C., in the final laps Thursday at Cleveland Speedway for a victory on the Southern Nationals Series. The third-starting Smith led 22 laps, including the final two, to earn $3,500 and his second career series victory. | Video | Schedule

"I thought I was beat, but I drove in the last two corners about five car lengths deeper than I had all night," the high-running Smith said. "I think I was better than him in turns three and four tonight, and that was the difference. I think he led the white-flag lap and was a little ahead of me, but I ain't real sure. We had a good race and he run me clean."

The lower-running Madden, a two-time series champion who started fifth, settled for second despite inching ahead the 33rd lap of the 35-lap main event.

"I had my charge going, and we were that close," Madden said, pinching his fingers together. "We had a great race. We just should have won it. The outside is the place to be here, and he used the momentum you can get up there. That carried him past us at the end."

Randy Weaver of Crossville, Tenn., rallied from 12th to finish third while ninth-starting Skip Arp of Georgetown, Tenn., and 13th-starting David Payne of Murphy, N.C., rounded out the top five at the third-mile oval.

Two top contenders weren’t around at the finish. Fast qualifier and polesitter Bub McCool of Vicksburg, Miss., led the first 12 laps and ended up 21st after breaking a yoke in his car’s transmission.

Series points leader Jonathan Davenport of Blairsville, Ga., fell out in 20th place, his car damaged in a scramble with Jake Knowles and Madden that brought out the third of four cautions no the 12th lap. Davenport’s demise triggered a disagreement in the pits between crew members for Davenport and Madden, and security was called to help break it up.

McCool jumped into the lead at the outset with Knowles, who started outside the front row, giving chase along with Smith, Madden and eventually Davenport.

Lap 12 changed everything though when Knowles slipped high in turn four and Davenport turned down to take advantage and found Madden on the low side. They ran three-wide partially down the frontstretch with Knowles losing control amid contact and spinning down the frontstretch into turn one.

Madden and Davenport continued side-by-side through turn one in a battle with contact that eventually sent Davenport into the turn-two wall.

During the caution period, McCool slowed on the frontstretch with transmission woes, handing the lead to Smith. Davenport restarted on the tail, but immediately got into the turn-four wall and was out of the race.

From the eventful lap 12 forward, Smith was in control through the race’s middle stages, but things heated up when Madden pulled alongside in the final laps. Madden inched ahead to lead the 33rd lap, but he lost ground in turn two and Smith went back ahead. Madden could never get as close again and Smith took the checkered flag.

Notes: Smith’s winning Rocket Chassis is powered by a RaceTek engine and sponsored by Cliburn Tank Lines, JP Drilling and SAE Parts. ... Smith’s previous series victory came in the 2006 Southern Nationals event at Cleveland. ... Following the race, series promoter Ray Cook was weighing potential penalties against the teams of Jonathan Davenport and Chris Madden because of the mid-race scuffle in the pits. ... A first-lap pileup in turn two brought out the first caution. ... William Thomas slowed on the frontstretch on the sixth lap for the second caution. ... Among drivers failing to make the main event: Rick Hixson, Brian Nuttall Jr., Derek Ellis, Johnny Pursley, Kevin Gibson, Donald Bradsher, Rick Rogers and Daniel Baggerly. ... Two $5,300-to-win events wrap up the series on Friday at Volunteer Speedway in Bulls Gap, Tenn., and Saturday at Tazewell (Tenn.) Speedway.