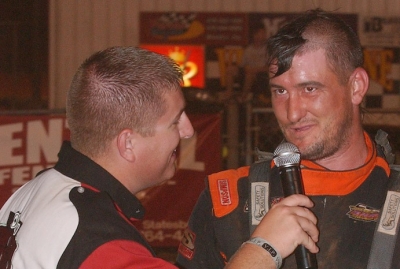 SWAINSBORO, Ga. (July 21) — Bub McCool of Vicksburg, Miss., took the lead from polesitter and hometown driver Chesley Dixon on the 10th lap Wednesday and led the rest of the way at Swainsboro Raceway for his first career Southern Nationals Series victory. McCool, who started eighth in the 53-lap main event postponed by rain Friday, earned $5,300 as the Ray Cook-promoted tour heads into the home stretch. | Slideshow | Video | Schedule

McCool used mostly the low groove on the 3/8-mile oval, working his way to the front quickly.

"They'd leave the bottom groove open, and I could keep my car pinched against the inside wall while the rest of 'em would drift out a little bit," said McCool, who briefly led Sunday’s event in Rome, Ga. "We’ve had good cars when we've run the series, but we ain't had no finishes."

Dixon, who also set fast time before Friday’s event was scrapped and restarted from scratch Wednesday, had a loose-handling car that settled for second behind McCool.

"We should have tightened the car up and we paid the price for not doing it," said Dixon, who led the first nine laps. "We run second and didn't tear nothing up, so it was a good night. McCool went past me so fast, I don't know where he came from that quick. I don't even know where he started."

Outside front-row starter Jonathan Davenport of Blairsville, Ga., who spun with a flat tire in turn four in the early laps, rallied to finish third and maintain his series points lead. Georgia transplant Mike Collins of Council Bluffs, Iowa, started 12th and finished fourth while Clint Smith of Senoia, Ga., rounded out the top five.

Third-starting Johnny Pursley of Clover, S.C., was among the frontrunners before mechanical issues forced him out, and Chris Ferguson of Mount Holly, N.C., challenged up front before carburetor problems ended his race.

The event was slowed by nine cautions, including one for a Henderson-Collins tangle in turn four.

Notes: McCool’s Victory Circle Chassis by Moyer is sponsored by Southern Belle and the Denny Hamlin Foundation. ... McCool is the only first-time series winner so far in 2010. ... Chesley Dixon lowered the track record in time trials with a 14.425-second lap. ... Four of the nine cautions were in the first seven laps. ... Tony Knowles of Tyrone, Ga., earned the PPM Racing Products Hard Charger honors for his 19th-to-sixth run. ... The series wraps up with July 22-24 events in Tennessee at Cleveland Speedway, Volunteer Speedway in Bulls Gap and Tazewell Speedway.