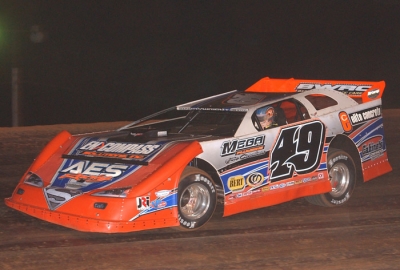 PHENIX CITY, Ala. (July 20) — Returning to the site of his richest victory, Jonathan Davenport of Blairsville, Ga., led all 35 laps Tuesday at East Alabama Motor Speedway to extend his points lead on the Southern Nationals Series. Davenport added his $3,500 payoff to the $20,000 he won at November’s unsanctioned National 100 at the 3/8-mile oval. | Video | Schedule

“We were really good in hot laps and the car was just perfect in the feature,” said the 26-year-old Davenport. “We worked off our notes from the National 100 last November, and it worked out for us. We've been here three times, and had a completely different racetrack each time. That made us a little unsure on tires, so we gambled and went a little harder than everyone else, and that worked out.”

Chris Madden of Gray Court, S.C., another former National 100 winner, rallied from ninth to second but never seriously challenged Davenport with most drivers running single file the final 10 laps. Clint Smith of Senoia, Ga., advanced from his 11th starting spot to third while 10th-starting Chris Brown of Spring, Texas, and Brian Booze of Marion, Pa., rounded out the top five on a track that allowed multigroove racing until the race's late stages.

The most significant of five slowdowns of the night came on the 21st lap when reigning series champion Tommy Kerr of Maryville, Tenn., and Stacy Holmes of Munford, Ala., battled for the second spot in front of Madden. Holmes slid in front of Kerr exiting turn two and the car the right front of Kerr's car got hung up on the left rear of the Holmes machine. They came to a grinding halt in turn three after running down the backstretch in tandem for an accident that knocked both drivers out of contention and brought out a red flag.