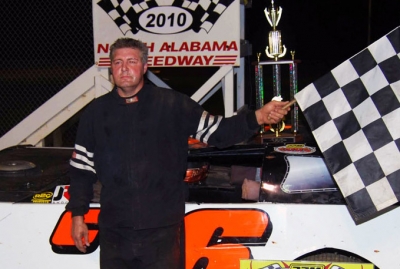 TUSCUMBIA, Ala. (July 18) — Chris Ragan of Ramer, Tenn., topped polesitter Anthony Burroughs of Muscle Shoals, Ala., on Sunday at North Alabama Speedway for a Southern Regional Racing Series victory. Ragan, who started third in the 20-car field, earned $2,000 for his first SRRS victory of the season and third of his career.

Burroughs settled for second in a race postponed by rain on Friday. Outside front-row starter Jamie Flannagan of Tuscumbia was third followed by Michael McKleroy of Muscles Shoals and Tony Morris of Murfreesboro, Tenn.