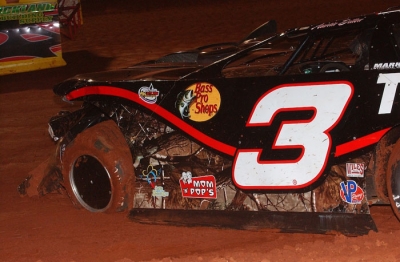 "We had just an excellent race car tonight, and we never really took the bridle off it,” said Madden, who started third. "We just ran it as hard as we needed to run. I’ve had problems with flat tires down here, and tonight the best line was up on the top of the racetrack, so I tried to run it there and not beat the cushion to death. We just kept a steady pace, but we did run it pretty hard in the last five laps.”

Sixth-starting Jonathan Davenport of Blairsville, Ga., stretched his series points lead by salvaging a runner-up finish on a tough night at the 4/10-mile oval while Shane Clanton of Fayetteville, Ga., finished third. Reigning series champion Tommy Kerr of Maryville, Tenn., was fourth and Clint Smith of Senoia, Ga., rounded out the top five.

Polesitter Ivedent Lloyd Jr. of Ocala, Fla., and Austin Dillon of Welcome, N.C., shared the front row with Dillon leading the first three laps. But Dillon’s tangle with the fourth-starting McCool in turn two while the pair raced for the lead created a multicar incident that ended with a smashed front end for Dillon, whose car sat against the inside rail in turn two. Davenport and Lloyd also landed in the mud against the inside guardrail at the entrance to the backstretch.

On the restart, McCool led the fourth lap but Madden quickly zipped past the driver whose brake line was damaged in the caution-causing accident. McCool completely lost his brakes three laps later and hit the wall in turns three and four.

Madden led from there, holding a steady advantage over Casey Roberts of Toccoa, Ga., who was gunning for his third straight series victory. Roberts ran second most of the way but a flat right-rear tire on the 48th lap knocked him from contention and he ended up seventh.

Davenport, who restarted from the rear after his involvement in the early accident, blasted through the pack into contention. He reached the top five near the midway point, and inherited second when Roberts pitted for a new tire.

Madden fought off the high-flying Davenport on the final restart and held a four-length lead, but after hitting some slime that had been previously thrown on the track by another driver, Madden's machine flirted with the cushion on the final circuit between turns three and four, momentarily slowing his run to the checkered. Davenport noticeably closed the gap off the corner, but was too far back to make the pass.

"When he jumped that cushion a little bit, I wasn't really close enough," Davenport said. "The accident earlier in the race knocked the nose on my car down too much, and I was having to turn the car off the cushion to get it to come off the corner. When I did that, it would cost me momentum. I wasn't gonna beat him unless he made a mistake.”

Notes: Madden’s Bloomquist Race Car is sponsored by Xtreme Customs & Cycles, Hamrick's of Gaffney, Henderson Amusements, Century Plastics, Swiftco, Cushman Paint & Body, Allstar Performance and Freeman Plumbing. ... Jake Knowles, who started 14th, saw a top-five run go by the wayside in the final laps when he lost oil pressure; he finished 11th. ... Action didn’t start until after 10 p.m. after rain hit early in the evening for the third straight series event. ...ï¿½ The entries of 33 teams represented 11 states. ... Shanon Buckingham and Donald Bradsher lost their qualifying times when they were light at the scales after time trials. ... Besides Bradsher and Buckingham, among other drivers failing to make the feature: Kenny Compton Jr., Jody Knowles and Tim Day. ... The 10-race series takes a day off before Tuesday’s event at East Alabama Motor Speedway in Phenix City paying $3,500 to the winner.