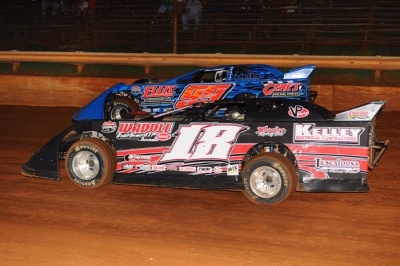 CLEVELAND, Tenn. (July 17) — Polesitter Ronny Lee Hollingsworth of Northport, Ala., led all 50 laps of the 20th annual Budweiser Jean Johnson Memorial at Cleveland Speedway for a Southern All Star victory worth $5,000.

Hollingsworth, winning his first series race since April 2009, rebounded from a tough loss the previous night at Boyd’s Speedway in nearby Ringgold, Ga., when he lost the lead to defending series champion Randy Weaver with seven laps remaining and parked his overheating car. | Slideshow | Video

Shane Clanton of Fayetteville, Ga., wrested the second spot from David Payne of Murphy, N.C., on the 39th lap to get the runner-up spot while Payne, whose No. 8 was smoking through the turns, held on for third. Weaver, of Crossville, Tenn., and Chris Brown of Spring, Texas, rounded out the top five at the third-mile oval.

Derek Ellis of Chatsworth, Ga., started outside the front row chased Hollingsworth early in the race but retired with a 20th-place finish after pulling up lame on the frontstretch.

Notes: Hollingsworth’s Vic Hill-powered Victory Circle Chassis is sponsored by Waddle Trucking and Kelley Electrical Contractors. ... Weaver's fourth-place finish moved him into the series points lead over Scott Creel, who finished 12th. ... Kevin Gibson, a former track champion, was making his 2010 debut at Cleveland; he won a consolation race was drew an early caution and dropped out of the main event. ... Bo Shirley and Shawn Chastain didn’t start the feature. ... Next up for Southern All Star competitors is the Mike Head Jr. Memorial on July 31 at Talladega Short Track in Eastaboga, Ala., a $5,400-to-win event.