Roberts sweeps Screven for two in a row 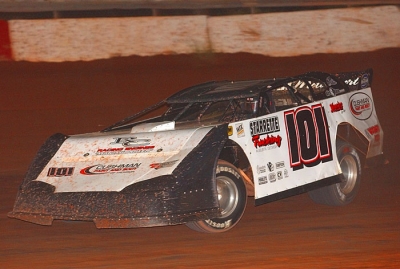 Casey Roberts leads all the way at Screven. (Brian McLeod)

Roberts pocketed $5,300 for his fifth career series victory, but he said his car wasn’t at its best in a race where he fought off challenges from Kenny Compton Jr. of Bland, Va. | Video | Slideshow

"We missed on tires and really kinda missed the whole setup,” Roberts said. "We just messed up, but we were lucky and had a good enough car to win and that's all that matters. I had to change the way I drove the car and lapped traffic was a problem at times. Kenny was running pretty good tonight, and we were fortunate to win it.”

The third-starting Compton grabbed the second spot early and challenged on the low side a few times on restart. He stayed with Roberts before tangling with a lapped got late in the race while making a move for the lead and parked with a 17th-place finish.

Johnny Pursley of Clover, S.C., finished second followed by eighth-starting Chesley Dixon of Swainsboro, Ga., a Southern All Star winner at Screven three weeks earlier. Clint Smith of Senoia, Ga., who started 16th, recovered from an early left-front flat tire to finish fourth and unrelated Jeff Smith of Dallas, N.C., improved from his 10th-row starting spot to round out the top five.

Brent Dixon of Elberton, Ga., was running third late in the race before slowing on the backstretch, and series points leader Jonathan Davenport of Blairsville, Ga., finished sixth after tangling with a lapped car, which sent him to the tail.

Eleven cautions slowed the action on a night when early rain showers helped push the racing past midnight.

Notes: Roberts drives a Victory Circle Chassis with a Randy Clary Engine and sponsorship from Starrette Trucking, Cushman Paint & Body and Woodard Pools. ... Tony Knowles was part of a three-car caution on the first lap but rallied to finish eighth. ... Ethan Hunter passed on a provisional starting spot because his car was damaged earlier in the night. ... Chris Ferguson of Mount Holly, N.C., earned the PPM Racing Products Hard Charger honors for his 24th-to-seventh run. ... The series heads to Rome (Ga.) Speedway for a $5,300-to-win event on Sunday evening. A church service is scheduled for 5 p.m. at Rome.