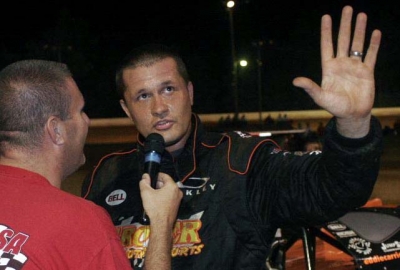 JUNCTION CITY, Ky. (July 16) — Eddie Carrier Jr. of Salt Rock, W.Va., took the lead from Greg Johnson of Bedford, Ind., on the eighth lap and led the rest of the eighth annual John Bradshaw Memorial at Ponderosa Speedway. Carrier fought off challenges from Mike Marlar of Winfield, Tenn., late in the 50-lap feature for his second straight $5,000 victory on the National All Star Racing Association. | Slideshow

Marlar reeled in Carrier with 10 laps remaining and pulled alongside the leader in turn one amid traffic on the 44th lap, only to have the slower car Arnie Fields slow exiting turn turn two, forcing Marlar to check up and giving carrier breathing room.

Marlar’s last chance to make a run at Carrier was halted by another caution when Fields spun in turn two, and Carrier wrapped up his victory in the final two laps.

Marlar settled for second with Johnson in third. Victor Lee of Stanford, Ky., was fourth and David Webb of Nicholasville, Ky., rounded out the top five in a race slowed by 10 cautions.

Notes: Carrier’s Rocket Chassis is powered by a Grover Motorsports engine and sponsored by Enginesï¿½ Inc., Cox Wrecker Service and Blue Ridge Machinery and Tool. ... The race pays tribute to a late track owner. ... Justin Rattliff ran in the top five early before dropping out on the sixth lap. ... Scott James spun on the 11th lap after losing a wheel. ... Tim Tungate got crossed up in a lap-24 wreck, collecting D.J. Wells and Skylar Marlar; that ended the night for Tungate and Wells. ... Jeremy Hines of Seymour, Ind., won the night’s Crate Late Model feature. ... Next up for NASRA competitors is a $2,000-to-win event Aug. 6 at Moler Raceway Park in Williamsburg, Ohio.