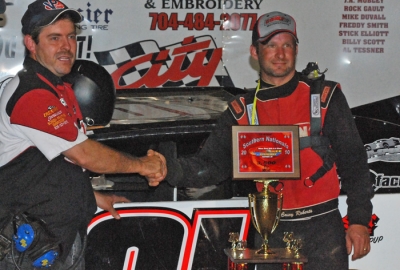 “That helps out a lot when you can start out front, for sure,” Roberts said. "Rambo, I knew he was going to be tough, but we had a good car for the race.”

Jonathan Davenport of Blairsville, Ga., posted his second straight third-place finish while seventh-starting Johnny Pursley of Clover, S.C., was third at the 4/10-mile Upstate oval. Ross Bailes of Blacksburg, S.C., started third but slipped back to finish fifth while Clint Smith of Senoia, Ga., rallied from 16th to finish sixth.

“The car was perfect,” said Franklin, the runner-up. "I just messed it up there in the feature and got ‘er too tight to roll around the bottom. My hat’s off to Casey. He had the better car tonight.”

Davenport grabbed third early in the race when Bailes pushed high in turn two, but he couldn’t advance any further.

“Just another solid points night, I guess,” said Davenport, last year’s series runner-up. "I’d really rather be racking up wins that points. Right now that’s all we can ask for. We’ll go on to the next and haven’t torn nothing up and see what we can do the rest of the week.”