Key restart lifts Breazeale past Thrash at the Mag 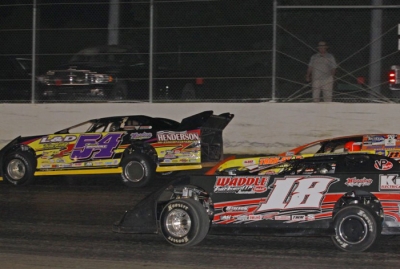 Ronny Lee Hollingsworth of Northport, Ala., was second while the third-finishing Thrash vainly protested to officials on the frontstretch after the race, claiming Breazeale jumped the race-changing restart. Fast qualifier Bub McCool of Vicksburg, Miss., the only driver to crack the 15-second mark, was fourth followed by Ray Moore of Haughton, La.

Thrash started outside the front row and built a straightaway advantage by lap eight, when he entered lapped traffic. The slower cars caused his lead to dwindle, and Breazeale made daring moves to slip by Brian Rickman, Hollingsworth and McCool to grab the second spot.

Cautions on laps 17 (a slowing Steve Bryan), lap 21 (for a slowing Kenny Merchant) and on lap 24 (a melee involving Jeremy Shaw, Klint Byars and provisional starter Ray Mauldin) slowed the action, the last one setting up Breazeale’s winning pass.

The race wrapped up the Four Crown Nationals, but the points championship won’t be determined until Aug. 13, when Greenville (Miss.) Speedway completes Thursday’s rained out weekend opener. Breazeale leads the miniseries standings after two victories and a runner-up finish.