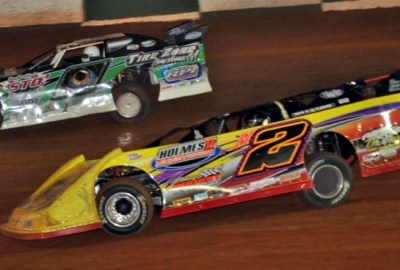 GLENCOE, Ala. (July 4) — Stacy Holmes of Munford, Ala., earned $3,444 at Green Valley Speedway on Sunday in a visit by the first-year Volunteer Racing Series. The third-starting Holmes took the lead from William Thomas of Phenix City, Ala., in the early laps and led the rest of the way.

Holmes was chased to the checkers by Ronnie Johnson of Chattanooga, Tenn., Eric Jacobsen of Seacliff Beach, Calif., and Clint Smith of Senoia, Ga. Kelly Hanvey of Cullman, Ala., rounded out the top five. Thomas ended up sixth.

The race was slowed three times, the most serious for a 10-car pileup in turn one on the first attempted start that drew a red flag. A lap-18 yellow appeared when Chris Thomas spun in turn four, and Tim Busha spun in turn four on lap 36.