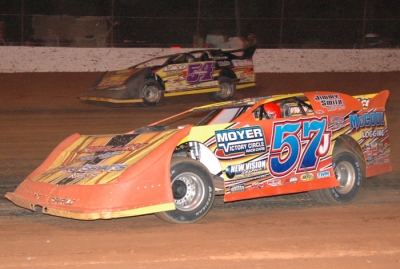 The polesitter McCool took the lead at the outset and was into lapped traffic after just eight laps as fellow front-row starter Jason Cliburn gave chase. A lap-15 caution for Bradley Price bunched the field, and a flurry of three-wide action erupted among the leaders. McDuffie took second from fading Cliburn and used the cushion to sweep around McCool on the 17th lap. McCool fell to third behind Breazeale a lap later.

McCool, however, stuck with his low groove and worked past Breazeale and then McDuffie to regain the lead on lap 23 and lead the rest of the way.