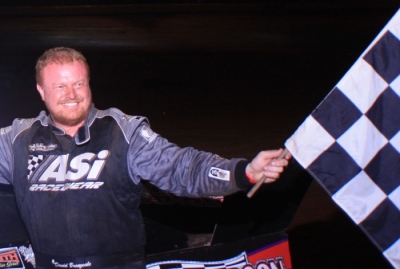 WINONA, Miss. (July 2) — Third-starting David Breazeale of Four Corners, Miss., overtook Kyle Beard of Trumann, Ark., on the 15th lap Friday at Central Mississippi Speedway and raced to his third PRO Dirt Car Series victory of the season. Breazeale’s triumph in the second round of the Fourth of July’s Four Crown Nationals paid $2,000.

Beard settled for second in the 40-lapper while fast qualifier Bub McCool of Vicksburg, Miss., was third. Dean Carpenter of Coldwater, Miss., and Jeff White of Kosciusko, Miss., rounded out the top five.

Breazeale went ahead exiting turn four on the 14th lap and the race ran caution-free until Mark Dodson’s turn-three spin on the 30th lap. The field lined up for a 10-lap dash to the checkers, and Breazeale held on the rest of the way.

Notes: Breazeale is sponsored by L&D Trucking and Henderson Motorsports. ... Ray Mauldin’s 23rd-to-13th run netted him the American Race Tires Hard Charger award. ... Ray Moore was knocked from contention when he hit an infield tire early in the race. ... Bo Gordon got spun between turns three and four on the fourth lap, ending his night. ... Drivers failing to make the feature: Chance Inman, Jason Milan, Eddie Rickman, Pat Nichols, Chad Washington, Jamie Tollison and Stormy Derryberry. ... The first round of the Four Crown Nationals was rained out when precipitation hit during the second consolation race. ... Next up for the PRO tour is the third round of the Four Crown Nationals on Saturday at Whynot Motorsports Park near Meridian, Miss; Sunday’s finale is at Magnolia Motor Speedway near Columbus, Miss.