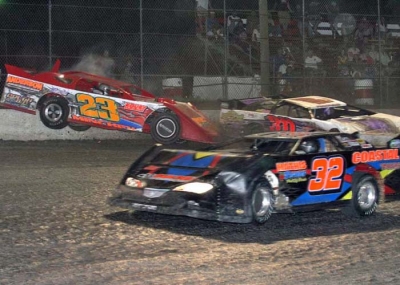 Lawton Minchew (23) gets air in this Volusia tangle. (ricksdarkroom.com

With the help of early cautions, Lloyd reached the second spot by the eighth lap, then overtook Whitener at the flagstand seven laps later, just before a turn-three pileup.

Lloyd stretched his lead late in the race while Whitener settled for second ahead of 10th-starting Tyler Ivey of Tallahassee, Fla. John Kellum and Adam Bedenbaugh rounded out the top five.

Notes: Lloyd earned an extra $100 from Astor Recycling. ... The race honored the 2005 Volusia Late Model champion who died in a highway accident. ... Two-time UDLMCS champion Johnny Collins of Jacksonville, Fla., broke a transmission in hot laps and scratched for the night. ... Next up for UDLMCS competitors is a July 3 event at Swainsboro (Ga.) Raceway.