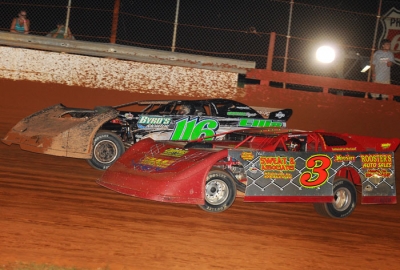 SYLVANIA, Ga. (June 26) — Chesley Dixon of Swainsboro, Ga., led all but one lap of a caution-plagued feature at Screven Motor Speedway for his second career victory on the Southern All Star Dirt Racing Series. Dixon, who also won at Screven in 2007, had a fierce battle with eighth-starting Randy Weaver of Crossville, Tenn., who lost an engine just one lap after wrestling the lead from Dixon. | Slideshow

Dixon earned $5,000 in taking the checkers ahead of fast qualifier and polesitter Scott Creel of Franklinton, La., and fifth-starting Jordan Bland of Concord, N.C., in a 50-lapper slowed by nearly 20 yellow flags.

Weaver worked his way into second by the 21st lap, then turned up the heat on Dixon, once making a pass negated by a caution. But when Weaver went ahead on the 24th lap, another caution appeared, this time for his smoking car that lost power down the frontstretch.

Dixon was back out front for the restart and led the rest of the way through a continued series of cautions and restart.

Notes: Dixon’s Rocket Chassis is sponsored by Sweat & Associates and Rooster’s Auto Sales. ... The first half of the 50-lapper had 14 cautions over 51 minutes. ... Dixon’s first career Southern All Star victory came on July 7, 2007, at Screven. ... Next up on the series is the first-ever tour visit to Wythe Raceway in Rural Retreat, Va., for a $5,000-to-win event on July 2.