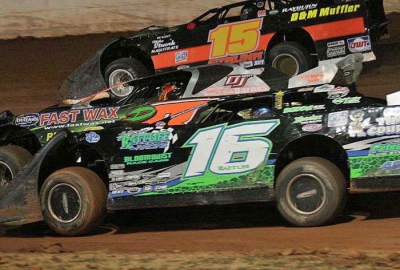 Linville, who led the first 27 laps, couldn’t regain the point from Rattliff and settled for second while Eddie Carrier Jr. of Salt Rock, W.Va., finished third. Mike Marlar of Winfield, Tenn., and 14th-starting David Webb of Nicholasville, Ky., rounded out the top five.

Rattliff settled into the fourth spot at the outset, taking third from Greg Johnson of Bedford, Ind., after a lap-six restart and finally battling past Marlar for the second spot on lap 19.

Rattliff began to reel in Linville in the second half of the race, catching him amid traffic on lap 25. They battled door-to-door on lap 27 before Rattliff edged ahead out of turn two on the 28th lap for a lead he’d never give up.