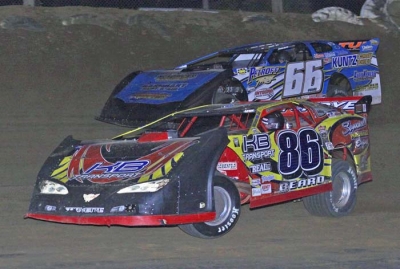 Outside front-row starter Bill Frye of Greenbrier, Ark., chased Beard from the second spot most the race in taking the runner-up spot while Shane Stephens of Arlington, Tenn., was third. Jon Mitchell of Texarkana, Texas, recovered from a lap-four spin to finish fourth and Brandon Smith of Flora, Ark., rounded out the top five.

Jon Kirby of Russellville, Ark., took the second spot from Frye after a lap-19 restart, but his suffered heavy damage when he got into the frontstretch wall, knocking him out of the race.

Besides Kirby’s wreck the most serious caution appeared on a lap-27 restart when several cars piled up in turn four before taking the green, including Daniel Waters, Curtis Cook, Wade Johnson, Andy Milliken and Dewaine Hottinger, who ran in the top five early in the race.

Two-time MSRA champion Joey Mack of Benton, Mo., also received damaged in the incident and gave up the third spot with a broken drivetrain.

Notes: Beard’s GRT Race Car is sponsored by KB Transport, Gary Beard Trucking and Samuel’s Performance Engines. ... Ian Samuels drove a Beard team car and drew cautions with spins on lap 19 and lap 27. ... Terry Henson broke a motor on the first lap and was the first driver out of the 20-car field. ... Eddie Provence was the Larry Shaw Race Cars Hard Charger after advancing from his 20th starting spot to finish a career-best seventh. ... Wesley Crutchfield and Bobby Derryberry failed to make the feature lineup. ... MSRA competitors head to Crawford County Speedway in Van Buren, Ark., for a Saturday night event.