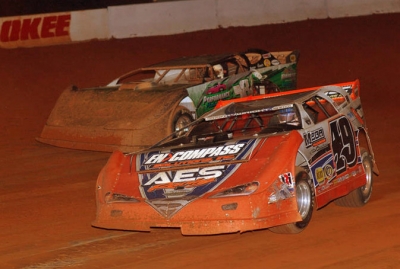 To earn the victory, Davenport survived an extremely dry racing surface that produced heavy dust at times and resulted in a single racing groove tight around the bottom of the racetrack.

“It feels good to finally get another win here,” said Davenport, who struggled at the 3/8-mile oval late in 2009 and early this year. “We’ve come here before and got embarrassed. We went home and done our homework and came back better. For me to win here around the bottom and the way the track was, it says a lot for these Barry Wright race cars.”

Davenport grabbed the lead on the start of the 50-lap race over three-time defending series champion Casey Roberts of Toccoa, Ga. Roberts fell in behind Davenport, but he didn’t hold the position long. As he crossed the stripe to complete the first lap, Roberts wiggled slightly. Dennis Franklin got into the rear of Roberts, causing damage to both cars and sending Roberts spinning.

The damage forced Roberts out of the event while Franklin remained in the race, but was never a factor.

When racing resumed, Davenport held the lead over Johnny Pursley of Clover, S.C. Pursley applied heavy pressure to Davenport early in the race, pulling alongside a number of times as Davenport attempted to run the high groove. Davenport moved to the bottom around lap 10, as the high side began to fade quickly. By lap 15, the entire field had moved to the bottom and the leaders had reached lapped traffic.

Davenport maneuvered through the slower traffic without much trouble, never allowing Pursley a chance to pass. The race ran green until lap 30, when Freddy Smith slowed in turn four.

Jeff Smith, who had advanced from seventh to third by the time the caution flew, passed Pursley for the second position on the restart and set his sights on Davenport. The Dallas, N.C., resident pressured the leader through the final 20 laps, pulling alongside on two occasions when Davenport slid high exiting turn two.

But Davenport turned back each of Smith’s challenges and went on to win the race by a five-length advantage.

“Right before that first caution I think we were starting to blister the right-rear tire,” Davenport said. “Luckily I was able to take my time and start driving off of the right front. There was a time or two I slid up. I knew he was there, but I just stayed on the bottom and kept it going.”

Smith settled for the second-place finish, citing tire wear and track conditions as reasons for not making a stronger run at Davenport.

“I thought I might have had something for (Davenport) once I got to second, but I had punished my tires too hard to get up there,” said Smith. “I didn’t realize it and when I did, it was too late. I tried to slow down and just drive the car straight, but I had already done the damage to the right rear.

“The track was so dry that it kind of took away the racing lane. Some guys were running their left-front on the inside birm in three and four and it was just blowing dry dust across the track. There were several laps I came off turn four completely blind, just hoping there wasn’t someone there.”

The finish is the fourth runner-up effort by Smith in the race that honors his late grandfather. Smith’s father, Freddy Smith, is a four-time winner of the race, but the younger Smith has yet to take home the trophy.

“I’ve tried my best to win this race, but I always seem to come up short,” Smith said. “One of the times I finished second was when dad won it. That was really special to be in victory lane with him. But to win it myself would really mean a lot to me, just because it is my grandfather’s race. It didn’t happen tonight, but we’ll try again next year.”

Pursley held on to finish third, surviving a late battle with Jordan Bland of Charlotte, N.C., who recovered from an early-race mishap to finish fourth. Jeff Cooke of Gaffney, S.C., finished fifth.