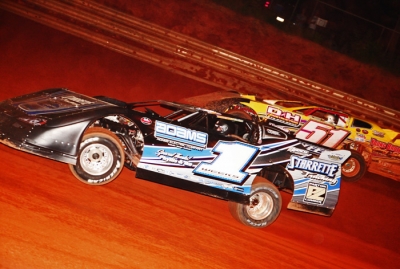 TRAVELERS REST, S.C. (June 19) — Capitalizing on a Chris Ferguson miscue, fast qualifier Ricky Weeks of Rutherfordton, N.C., took the lead on the third lap at Travelers Rest Speedway and led the rest of the way for a $3,500 payday on the Clash South Tour.

“My car was perfect. I could run whatever speed I needed to,” said Weeks, who built leads of nearly a half-track at the 3/8-mile oval. "They told me I had a big lead so I tried to slow down and set a good pace. But I could go hammer down if I needed to.”

Benji Cole of Canon, Ga., held off a hard charging Jim Rasey of Southington, Ohio, for the second spot while Lee Cooper of Greer, S.C., and Dustin Mitchell of Pine Level, N.C., rounded out the top five.

Ferguson, of Mount Holly, N.C., jumped the turn-four cushion on the third lap and hit the wall, and he dropped back to third and eventually retired with a flat tire.

Tim Allen of Kannapolis, N.C., took second from Cole and appeared to be ready to take a run at Weeks, but he slowed a lap later and pulled off the track.