Ashley fights off Tippen, Christian for I-30 win 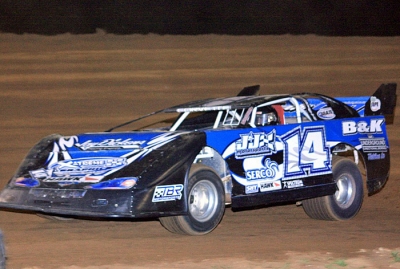 Ashley led the entire 25-lapper to collect $1,250 for his 38th career series win but first since Aug. 31, 2008 at Champion Park Speedway in Minden, La. Tippen, of Minden, La., was second with Gary Christian of Broken Bow, Okla., in third. Series points leader Rob Litton of Alexandria, stretched his lead with a fourth-place finish and Jody Prince of Sibley, La., was fifth.

"I never really knew Allen was there I was concentrating so hard on hitting my marks, on how I was driving the car, on how I was braking,” Ashley said. "I was making a lot of mistakes out there, but once again when you are up front, you kind of have the catbird’s seat of what is going on. ... I felt like there was no one that could pull underneath us unless I made a huge mistake.”

Ashley raced to an early lead at the drop of the green with Christian, Tippen and Litton following close behind. Tippen took second from Christian on the fourth lap, two circuits before the race’s lone yellow appeared for Kyle Beard of Trumann, Ark., who lost control on the frontstretch.

On the restart, Ashley bolted out to a seven-length lead on Tippen, who chased Ashley in the low groove while Christian tried the high side midway through the race.

After Ashley got a little breathing room amid traffic, Tippen was just a few lengths back on lap 23 as the top three distanced themselves from Litton. But Ashley kept his pursuers at bay in the final laps.

Notes: Ashley's GRT Race Car is powered by Wall 2 Wall Performance Engines and sponsored by B&K Underground Directional Boring, J&J Motorsports, Serco, Hawk Performance and X-Treme Graphics. ... Ashley, a three-time series champion, is third on the all-time SUPR series win list with 38 victories, behind Kenny Merchant (55) and Doug Ingalls (41). ... Allen Tippen has posted three straight top fives and his second consecutive runner-up finish in his new MasterSbilt by Mars Race Car. ... Kyle Cummings of Sibley, La., was the hard charger of the race, going from 13th to eighth. ... Wesley Crutchfield of Sheridan, Ark., lost an engine in hot laps, scratching him from the feature lineup. ... Jason Botsford of Pearcy, Ark., made contact with the frontstretch wall near the flagstand in his heat race, causing damage that ended his night. ... Paul Joyner of Laird Hill, Texas, pulled off the track with an flat tire early in the main event. ... The 15-minute feature ended at 10:10 pm and was slowed by a single caution. ... Fifteen cars finished on the lead lap. ... SUPR continues its weekend at I-30 with a Saturday night event.