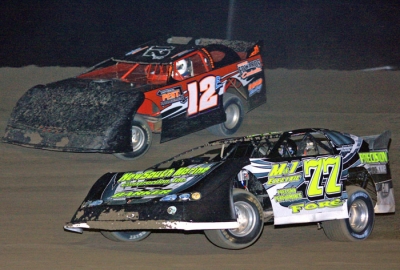 The third-starting Fore and series points leader David Breazeale of Four Corners, Miss., dropped Moore to third by lap 34, then Moore regained second from Breazeale before pulling off the track on lap 43. Fore led the rest of the way to take the checkers ahead of Breazeale, a consolation race winner.

Keith Miller of Sumrall, Miss., was third followed by hard charger Joseph Joiner of Milton, Fla., and Steve Bryan of Collinsville, Miss. Polesitter Dewayne Estes of Greenville dropped out on the 16th lap and fourth-starting Chad Thrash of Meridian, MIss., lost a driveshaft on lap 10.

The most serious caution came on the 16th lap for a violent accident of Dewitt, Ark., whose No. 99 was heavily damaged in a frontstretch wreck.

Notes: Fore is sponsored by New South Marine, M&I Electric and Precision Marine. ... Fore finished second to Ray Moore in an unsanctioned May 22 event at Greenville. ... Only five drivers completed 50 laps and seven were running at the finish. ... MSCCS competitors head to Jackson (Miss.) Motor Speedway for a June 19 eventï¿½ paying $2,500 to the winner.