From series, team and correspondent reports 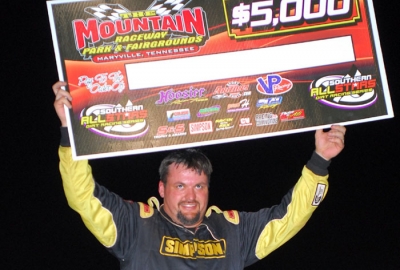 MARYVILLE, Tenn. (June 12) — Reigning series champion Randy Weaver of Crossville, Tenn., survived a difficult racing surface for a $5,000 Southern All Star Racing Series victory at Mountain Raceway Park. The polesitting Weaver led all the way in a 50-lapper that saw only five cars running at the finish. | Video | Slideshow

David Payne of Murphy, N.C., finished second, the only other driver on the lead lap, followed by hometown driver Jason Welshan, Scott Creel of Franklinton, La., and Daniel Baggerly of Rural Retreat, Va.

"I know (the promoters) are trying to make it racy, but whatever we did on this deal, check it off the list," Weaver said. "It's hard to race when it's wide open; that's one thing, but when it's real rough like that ... I know they didn't want it that way. Last year in this race, it was black and smooth, and me and Skip (Arp) had a heckuva race right there at the end. I didn't know it could get any better than that, so I don't know why you'd change it."

Weaver won his second straight series race, following a May 22 victory at Cleveland (Tenn.) Speedway, and the 13th of his career.

Notes: Randy Weaver's Bloomquist Race Car is powered by Race Engine Design and sponsored by BKW Disaster Recovery & Rebuilding, The Bailey Company, VP Racing Fuels and Gunter Drywall. ... Weaver had mechanical problems in hot laps that limited him to a single circuit. ... Bobby Giffin drove the No. 31 GRT Race Car normally driven by Skip Arp, who was out after injuring his back playing golf. ... Freddy Smith’s radiator was hit by a clod of mud and cracked during hot laps, and he made a quick trip to his Seymour, Tenn., race shop for a new one so he could return and start the main event. ... Next up for the Southern All Stars is a June 26 stop at Screven Motor Speedway in Sylvania, Ga.