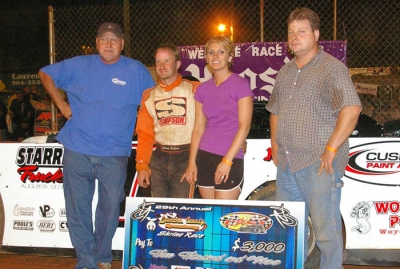 Franklin settled for second at the 3/8-mile oval while Jeff Cooke of Spartanburg, S.C., finished third. Mike Ashley of Greenwood, S.C., and Travis Leake of Woodruff, S.C., rounded out the top five finishers in the midweek special. Fast qualifier and series points leader Johnny Pursley of Clover, S.C., was running third on the 24th lap when he spun out of contention; he finished 11th.

Roberts started outside the fourth row and used the inside groove to work his way toward the front, taking second from Pursley on the 23rd lap and setting his sights on Franklin. Roberts lost ground to Franklin on the lap-24 restart, but he reeled in the leader and made a daring outside pass for the winning move.

Notes: Roberts drives a Victory Circle by Moyer Chassis with a Randy Clary Racing Engine and sponsorship from Cushman Paint and Body, Starrette Trucking, Dirtface Racewear, VP Race Fuels, Hoosier Tire South by Brian and Concept Graphics. ... Williams Morgan won the Limited Late Model feature. ... Alan Walker scratched from the feature after a hard crash in qualifying. ... Travis Leake debuted a new Rayburn Race Car. ... Mike Gault, who won the previous Saturday’s Super Late Model feature at Laurens, was running third on the fourth lap when he broke a driveshaft. ... Late arrival John Henderson tagged the tail of the feature. ... Next up for Southern All Star East competitors is the $7,000-to-win Grassy Smith Memorial on June 25 at Cherokee Speedway in Gaffney, S.C.