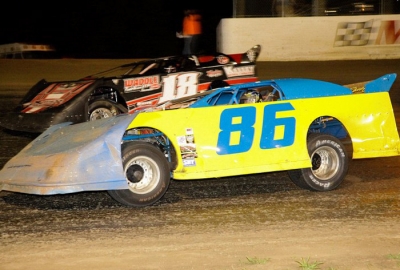 Hollingsworth, who crossed the finish line 5.5 seconds ahead of runner-up Stacy Taylor of Jacksonville, Ark., earned $5,000 for the unsanctioned victory at the 3/8-mile oval.

Rickman, who dueled with Hollingsworth in an exciting battle before pulling away, fell out on the 36th lap with a failed drive flange.

“I hate it for them (Rickman),” Hollingsworth said. “They broke and we were kind of slow to get started. ... We came out here and practiced for two days. We really struggled last weekend, probably the worse than I have ever had in a couple of years. So we went back to the drawing board, worked on this hot rod and man, it was good.”

The race started with a three-wide battle for the lead down the backstretch among Hollingsworth, Dacus and Rickman with Rickman leading the first lap.

The top three pulled away a few laps later and Dacus was closing on Rickman when a lap-10 caution slowed the action. A Justin McRee-Chris Brown tangle brought out another yellow on the restart, and Hollingsworth went ahead when action returned on lap 11.

Up front, the Hollingsworth-Rickman battle was turning into a tight one as the second-running Rickman began negotiating lapped cars to cut into Hollingsworth's lead. Rickman went back ahead on the 29th lap and edged away before a lap-36 caution for a car in the turn-two wall.

The final caution appeared on the restart when Dean Carpenter spun in turn three, and during the caution laps, Rickman headed for the pits, later discovering the broken drive flange. He ended up 17th.

Hollingsworth inherited the lead for the restart and no one could keep up in the final circuits with Dacus, Taylor and Baggett giving chase.

Hollingsworth had a four-second lead when Taylor took second from Dacus with six laps remaining, and Baggett dropped Dacus to fourth a lap later. Up front, Hollingsworth cruised the rest of the way for his second special event victory of 2010.