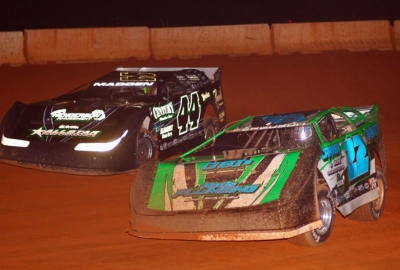 Madden dropped out a few laps later with an overheating car while series points leader Johnny Pursley of Clover, S.C., moved up to finish second with a late-race pass of three-time series champion Casey Roberts of Toccoa, Ga. Jeff Smith of Dallas, N.C., and Ross Bailes of Blacksburg, S.C, rounded out the top five.

In victory lane, Ferguson made a special phone call to his car owner, Jack Starrette, who was unable to attend after undergoing bypass surgery. "He’s home from the hospital after having heart surgery last week," Ferguson said. "He actually come home yesterday and was here with us in spirit.”

At the outset, Madden jumped to the lead and was strong on double-file restarts following cautions on laps three, seven and 12. But Ferguson stayed in the hunt, inching closer through lapped traffic and overtaking Madden exiting turn two on the 20th lap. Shortly thereafter Madden’s lost power down the backstretch and Ferguson led the rest of the way.

“I felt like (Madden) was a lot better than me on the restarts,” Ferguson said. “I’d stay in about three or four car lengths and then we’d get a little run. The more we ran, we tightened our car up, the better we got there at the end.

“The track was racy tonight but there were different parts of the track you couldn’t run on. You either had to run the bottom or the very top. I tried to run in the middle when I was catching, Madden and he pulled away from me and I was like, ’Well, I’m not gonna try that again.’ ”

Madden simply couldn’t stay on the track in the second half of the race. “We ran hot and just tried to hold on,” he said.

Ferguson led the final 12 laps pursued by Roberts, Pursley, Smith and Bailes. One more caution appeared on the 24th lap when Jim Ramey went around down the backstretch. Pursley took second from Roberts after the final restart, but Ferguson maintained a five-length advantage at the checkers.

Notes: Ferguson’s Rocket Chassis is sponsored by Starrette Trucking and Carver & Sons Roofing. ... Ferguson was using a new Randy Clary powerplant. ... Ferguson dedicated his victory to Mike Butler, the Cherokee Speedway track photographer who passed away in December 2009. ... The top 10 qualifiers were locked in through qualifying with the rest of the field set by a consolation race. ... Next up for SAS East competitors is the Laurens County Shrine Race on June 8, a Tuesday special at Laurens County Speedway in Laurens, S.C.