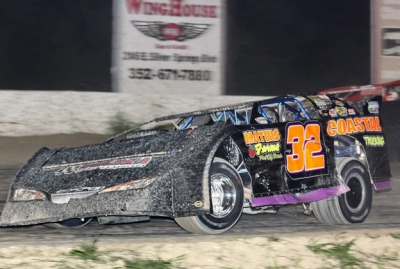 Fast qualifier and third-starting Ivedent Lloyd Jr. of Ocala finished second in the 75-lapper while Mark Whitener of Middleburg, Fla., was third. Jack Nosbisch Jr. of Riverview finished fourth while Tyler Ivey of Tallahassee, Fla., had three miscues — a first-lap spin, a wall-climbing wreck while running second and yet another spin — yet still ended up fifth.

Polesitter Darrell Padgett of Jacksonville, Fla., spun on the second attempted start and ended up seventh in the 21-car field of a race that honors family members of the track’s 1981-94 owners who were killed in a plane crash 15 years ago.

Lloyd and Whitener dueled for the lead much of the way, with Nosbisch also working his way into the mix. Cobb also caught the leaders and just after Nosbisch took the lead from Lloyd on the 54th lap, Cobb made his move and took command.

Cobb extended his lead while Lloyd and Nosbisch continued battling for second. A couple of late-race cautions bunched the field, but Cobb repelled Nosbisch on a lap-68 restart and held on for the victory.

Notes: Cobb’s No. 32 is sponsored by Mathis Farms and Coastal Trucking. ... Sixth-place finisher Christian Augspurger at 15 is the youngest starter in Powell Memorial history. ... David Clegg’s night ended in his heat race when his car rode the wall in turn one toward turn two, destroying the warning signal. It took track crews extra effort to get Clegg’s machine off the wall. ... Among Powell family members on hand was James Powell III, whose 4-year-old twin daughters were among those killed in the ’95 plane crash near Gainesville, Fla. ... The covered playground area behind the main grandstand is dedicated to the memory of the girls. ... Next up for UDLMCS competitors is the $3,800-to-win Scott Thompson Memorial on June 26 at Volusia Speedway Park in Barberville, Fla