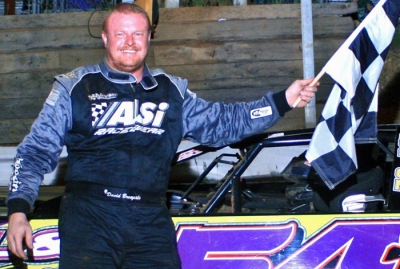 Klint Byars of Carrollton started outside the front-row and ran second early in the race, but he jumped the turn-two cushion on the 14th lap. He avoided heavy contact with the wall, slipped back to fifth and retired during a lap-20 caution with an overheating car.

Three mid-race cautions slowed the action, first for a slowing Brian Rickman on lap 20. Chase Washington slowed to draw a lap-22 yellow and a lap-23 caution appeared when Jay Burchfield and Ray Mauldin made contact on the frontstretch.

Notes: Breazeale is sponsored by L&D Trucking and Henderson Motorsports. ... Breazeale won his second PRO event of the season. ... Breazeale was the only qualifier under 13 seconds. ... Shane Stephens of Arlington, Tenn., earned American Race Tires hard charger honors with his 20th-to-10th run. ... The PRO Dirt Car Series returns to action over the Fourth of July weekend with the Four Crown Nationals at Greenville (Miss.) Speedway, Central Mississippi, Whynot and Magnolia Motor Speedway in Columbus, Miss.