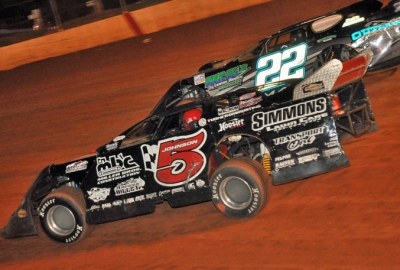 CHATSWORTH, Ga. (May 29) — Ronnie Johnson of Chattanooga, Tenn., took the lead from Randy Weaver of Crossville, Tenn., on the 19th lap at North Georgia Speedway and led the rest of the 40-lapper for his second Volunteer Racing Series victory of the season. Johnson earned $3,000 in the third-ever event on the first-year tour. | Slideshow

Weaver settled for second at the third-mile oval while Billy Ogle Jr. of Knoxville, Tenn., winning of the previous night's series event at Boyd's Speedway in Ringgold, Ga., was third. Tony Knowles of Tyrone, Ga., and Mike Weeks of Friendsville, Tenn., rounded out the top five.

Four cautions slowed the event, the most serious for a Jamie Perry-Brian Hickman tangle in turn four just past the midpoint.