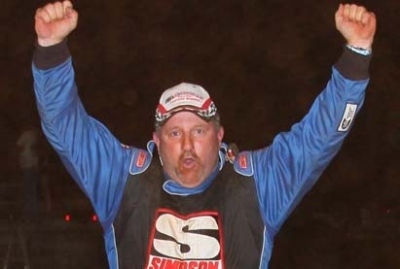 ELKIN, N.C. (May 29) — Ricky Weeks of Rutherfordton, N.C., had one more chance to avoid having a year-long losing streak on the Carolina Clash Super Late Model Series, and he made the most of it Saturday night at Friendship Motor Speedway. | Slideshow

Weeks, the five-time series champion whose previous victory came May 30, 2009, outdueled Jeff Smith and Chris Ferguson for a $4,000 payday and his series-leading 30th career victory.

Smith, of Dallas, N.C., battled with Weeks before slamming the inside wall in turn two on the 11th lap, and Ferguson, of Mount Holly, N.C., moved in to challenge next. Ferguson actually made a high-side pass of Weeks, but a caution erased the move and Weeks held on the rest of the way.

Ferguson settled for second while Dan Breuer of Mooresville, N.C., was third. Wisconsin transplant Luke Roffers of Concord, N.C., and Dean Bowen of Whiteville, N.C., rounded out the top five. Dennis Franklin of Gaffney, S.C., who entered the race leading Carolina Clash points, was eighth after recovering from a lap-37 spin.

Among the cautions was a six-car pileup on lap-24 restart triggered by contact between Ferguson and outside front-row starter Chris Meadows, who ended up getting into the wall. Donald Bradsher's car rolled after being hit by Scott Shirey while Ronnie Hoover, Dustin Mitchell and Ray Tucker also got a piece of the melee.