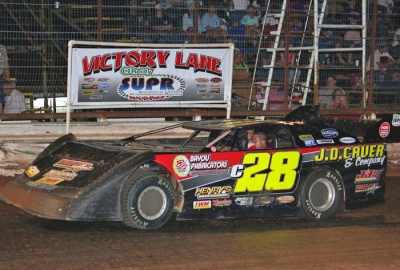 The fourth-starting Cummings, who pressured Merchant several times over 50 laps, posted yet another top-five finish at Champion Park but couldn't overcome the reigning series champion.

"I wasn't aware of how close Kyle was, but I knew the (lap) cars were holding me up, so I knew he had to be on me," Merchant said. "The way the stands are here, you can't really see up in the stands to see your crew (for signals). As a driver though, you know in your gut that he is there and I knew Kyle is always good here. I feel like he was right on me, but didn't know close he drew up behind me."

Cummings took the SUPR points lead with the runner-up finish, but the outcome left him wishing he'd have started ahead of Merchant.

"Positioning was key tonight the way the racetrack was," Cummings said. "I felt like if I could have started on the pole then I could have won the race. It would have been up to me to bobble then for somebody to get around me. But for the way it took me to the end of the race to get to Kenny tonight and to wait on him to make a mistake — Kenny is not going to make a mistake too often."

Kevin Sitton of Baytown, Texas, had a spirited battle with Cummings through three-quarters of the race, before settling for third. Jon Mitchell of Texarkana, Texas, was the hard charger with his ninth-to-fourth run and series co-founder Donald Watson of Greenwell Springs, La., rounded out the top five.

The race got off to a shaky start with a six-car melee in turn two at the drop of the green flag that involved Robbie Stuart, Allen Tippen, Jeff Chandler, Doug Begnaud, Dustin Hyde and Rob Litton, who entered the event leading SUPR points.

The second start was much better as B.J. Robinson, Sitton and Cummings engaged in a three-wide battle for second as Merchant set the pace. Sitton emerged as runner-up as the top three drivers pulled away from the fourth-running Watson.

Cummings took second from Sitton and the leaders faced slower cars after just eight laps. After a pair of cautions, Merchant built a half-straightaway lead while Sitton kept heat on the second-running Cummings.

Merchant had a three-second lead at halfway, but Cummings closed the gap through traffic, tightening the lead in the race's late stages.

Cummings got right on Merchant's rear deck, but couldn't find a way past as Merchant wrapped up his fourth career victory at Champion Park, all over the past 12 months.

Notes: Merchant's Trak-Star chassis is powered by Wall 2 Wall Performance Engines and sponsored by, J.D. Caver & Company, TWM Racing Products, J&J Motorsports, Henry's Auto Salvage & Bayou Fabricators. ... Merchant leads the series with 55 career victories. ... He's won four out of the last five series series events at Champion Park. ... Merchant elected to skip SUPR's weekend finale at Lone Star (Texas) Speedway after hearing of the death of fellow racer Donald Goodman, who died after injuries sustained in an accident at Monroe (La.) Motor Speedway. Merchant competed against Goodman in his ASA-style pavement Late Model. ... The 27-minute feature race ended at 11:52 p.m. and was slowed by three cautions. ... Twelve cars finished on the lead lap. ... Hometown driver Allen Tippen debuted a MasterSbilt by Mars Race Car at Champion Park. Tippen struggled in the heat and spun, but won a consolation to start 17th in the feature. He ended up 11th. ... Tom Earl III of Haslet, Texas, blew an engine while running in second to lock down the final transfer spot in the first consolation race. ... Hometown driver Wesley Chandler busted his car's radiator in a three-car wreck in heat one, ending his night. Involved in that same accident was Paul Joyner of Laird Hill, Texas, whose left front wheel got pushed up into the frame to the top of the spindle. Joyner was in line to take a provisional, but the damage to his car was too extensive to repair. ... Other drivers not making the feature: Trey Beene, Nicholas Brown, Jim Bryant, Ron Cavanaugh, Lee Davis, Clay McWilliams and Jason Polite.