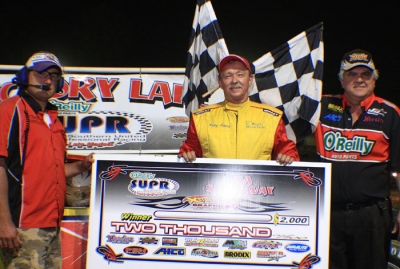 Adams, breaking a string of 41 SUPR races since his July 4, 2008, victory at Champion Park Speedway in Minden, La., notched the 34th victory of his series career in turning back Cummings.

"I seen his nose a time or two you know," said Adams, who had a rare winless SUPR campaign in 2009. "I made a mistake in the race and got a little too far off the bottom and he tried to take advantage of it. I closed it back up, after that I knew he was back there, but I never did see him again."

Cummings, also looking for his first SUPR victory since 2008, was up to second early but couldn't find a way past Adams.

"We knew we had a good car and needed to be on Ronny for him to make a bobble for us to get around," the second-generation driver said. "Ronny finally made a bobble one time, but it just wasn't quite enough and we kind of got together coming out of two. It was nothing that I wouldn't have done to him, just protecting the lead there. Congrats to Ronny, it was a good win for him."

The surface at the tight oval began to rubber up late, but a few drivers were able to make the top groove come in during the 40-lapper. Fifth-starting Rob Litton of Alexandria, La., finished third while reigning series champion Kenny Merchant of West Monroe, La., rode the cushion in improving from 15th to fourth. Robbie Stuart of DeRidder, La., started on the last row of the 22-car field and rallied to finish fifth.

After one failed start, Adams took command early over Doug Begnaud with Cummings working his way into second before lap-11 caution for Begnaud, who pulled to the infield. Cummings got a good restart and tried to wrestle away the lead from Adams, but Adams held on as the frontrunners edged away to lead third-running Trey Beene by six seconds at the halfway point.

Litton took third from Beene on the 24th lap, and a lap-27 caution reset the field for the final restart. Adams, Cummings and Litton broke away before Litton worked past Beene, too late to catch the frontrunners before the finish.

Adams had a last scare on the white flag when another competitor knocked an infield tire barrier across the track, but he held off a last-ditch charge from Cummings.

"We most definitely had to change the car up from our 11th-place run from the last race here," Adams said of his May 7 visit. "This track is so much different than what we usually running on. There is more silt and sand in the racing surface, so we tightened the car up quite a bit.

"I actually won this race I think in the heat, due to the fact that I drew a big number and started on the rear of the heat. I was able to move to the front of the heat and start on the front row of the feature. The track got a little one-laned and I was able to hold 'em back."

Notes: Ronny Adam's MasterSbilt by Stuckey's is powered by a Robert Nealy engine and is sponsored by C. Wrights Machine Tool, Jesel, Hoosier Tires and Brodix. ... Adams is fourth on the all-time SUPR victories list. ... The 40-lap feature event started at midnight and lasted 23 minutes. ... Sixteen cars finished on the lead lap. ... Rob Litton took over the series points lead from Ray Moore, who spent the weekend at the 18th annual Dart Show Me 100 in Wheatland, Mo. ... The first start was called back by multicar scrambles. Front-row starter Doug Begnaud of Cypress, Texas, darted to the infield to avoid a chain-reaction accident and slammed a turn-four tire barrier that sent his car airborne at a 70-degree angle. He was able to continue. ... Former SUPR regular Robbie Starnes ran as a teammate to Chris Holley. ... SUPR's three rookie competitors struggled: Alex Ashley was the last car on the lead lap in 16th, while Josh Danzy and Skip O'Neal were 18th and 21st. ... Mark Andrews of Marion, La., took a hard hit into the turn-two wall in the fourth heat race. He was uninjured but the car was too damaged to continue. Other drivers failing to make the feature: Jim Bryant, Wesley Chandler, Joey Couvillion, Lee Davis, Devane Hillman, Paul Joyner, Jody Prince, Bryan Sugg, Trey Williams. ... The second race of SUPR's holiday weekend tripleheader is Saturday at Champion Park Speedway in Minden, La.