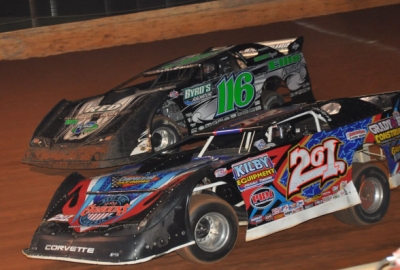 RINGGOLD, Ga. (May 28) — His car slowing coming to the checkered flag, polesitter Billy Ogle Jr. of Knoxville, Tenn., survived a broken axle on the final lap at Boyd's Speedway for a $3,000 victory on the Volunteer Racing Series.

"I was done. I was just glad that was the checkered, because I wasn't going to make it another lap," Ogle said after climbing from his No. 201 in victory lane. "It broke and right rear and I was just trying to keep it off the wall." | Video | Slideshow

Ronnie Johnson of Chattanooga, Tenn., who nearly slipped past Ogle with five laps remaining, was too far back in second to take advantage at the third-mile oval. He finished second followed by Tommy Kerr of Maryville, Tenn., and fast qualifier Mike Weeks of Friendsville, Tenn.

Ogle jumped into the early lead but had his hands full with Randy Weaver of Crossville, Tenn., early in the race. As the frontrunners came upon the slower car of Rick Hixson, Weaver swung to the outside to overtake Ogle on the 17th of 40 laps.

Weaver appeared to be in command, but mechanical woes forced his No. 116 to a stop on lap 29, handing the point back to Ogle, who outran Johnson the rest of the way and limped to victory.