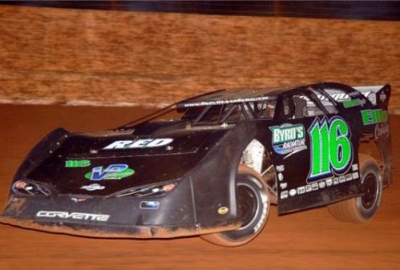 CLEVELAND, Tenn. (May 22) — Randy Weaver of Crossville, Tenn., outdueled early leader Chris Madden of Gray Court, S.C., on Saturday for a victory in the 33rd annual Tennessee Memorial at Cleveland Speedway. Taking the lead after a dazzling battle through the early stages, the third-starting Weaver earned $5,000 for his first Southern All Star Racing Series victory of the season and 12th of his career. | Video

"We ran door-to-door with him for probably eight or 10 laps, a heckuva race," said Weaver, who took over for good when a slower car hampered Madden's higher line. "It had to be fun to watch for the fans. When you've got two Bloomquist (Race Cars) up there dueling, it's hard to drive by those guys."

Fast qualifier and polesitter Chris Ferguson of Mount Holly, N.C., took second from the fellow front-row starting Madden on a late-race restart to finish as the runner-up in his first trip to Cleveland while Madden, who earlier waged a side-by-side duel with Weaver, settled for third. Derek Ellis of Chatsworth, Ga., rallied from 15th to finish fourth and Shane Clanton of Locust Grove, Ga., rounded out the top five at the third-mile oval. Series points leader Scott Creel of Franklinton, La., was 11th.

Weaver's, last year's Southern All Star champion, won his second straight Tennessee Memorial title and captured his first series event since last October in Lavonia, Ga. The victory gave Weaver his second straight victorious weekend following his $9,700 triumph in the unsanctioned Red Farmer Classic on May 15 at Talladega Short Track in Eastaboga, Ala.

"Our team's turned around the last two or three weeks, and man, we've been on a good roll. If nothing else, it's just turned around to where we can make adjustments, and I'm learning how to drive these Bloomquist cars," Weaver said. "We just hit it right tonight. Any time you can outran Madden and Clanton and some of them guys, you've gotta put a checkmark on your list, because you're definitely turning your team in the right direction."

Notes: Weaver's Bloomquist Race Car is powered by a Race Engine Design powerplant and sponsored by BKW Disaster Recovery & Rebuilding, The Bailey Company, VP Racing Fuels and Gunter Drywall. ... Weaver has been dedicated recent victories to former car owner Calvin Cheek of Rockwood, Tenn., the former owner of Weaver's hometown track, Crossville Raceway. "Calvin is so very missed, he probably doesn't realize how much so," Weaver said, choking up in victory lane. "This team is really, working great. Which is a testament to Calvin whom always pushed me to get it to the front more." ... Former series champion Jamie Perry was sent off the track for rough driving after a frontstretch incident under caution with Brian Hickman. ... Among other cautions in the 50-lap feature was a lap-three tangle among Todd Morrow, Brandon Kinzer and William Thomas in turn four. ... Jake Knowles spun early to draw a caution. ... Mike Hill slowed to draw a lap-31 yellow flag. ... Cleveland regular Keith "Shorty" Frazier was taken to a nearby hospital after a first-lap accident in the second consolation race. He was conscious and alert but precautions were taken because of previous back and neck injuries, series officials said. ... Among other drivers failing to make the feature lineup: Kayne Hickman, Gave Wilson, Rodney Weeks and two-time Southern All Star race winner Jonathan Davenport, who wrecked in qualifying and damaged the rear clip of his Barry Wright house car. ... Davenport's withdrawal moved Bobby Giffin from a consolation race into the top 10 drivers locked into the starting lineup. ... Southern All Star competitors take a break before returning to action June 12 for a $5,000-to-win event at Mountain Raceway Park in Maryville, Tenn.