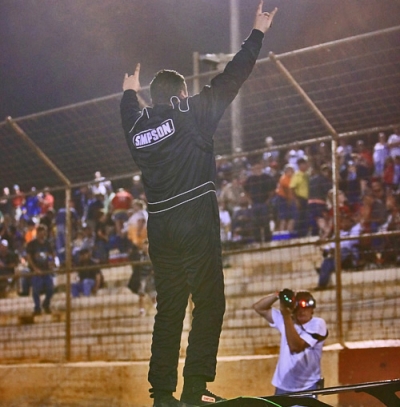 EASTABOGA, Ala. (May 15) — Polesitter Randy Weaver of Crossville, Tenn., led all but one of the 97 laps of the inaugural Red Farmer Classic at Talladega Short Track for one of the biggest victories of his career.

Weaver fought off early challenges from Ronnie Johnson of Chattanooga, Tenn., but mostly cruised to a $9,700 payday at the third-mile oval across the highway from one of NASCAR's showplace tracks. | Notebook | Video | Slideshow | Prelims

"This was definitely the best car I have ever had here," Weaver said, crediting the Bloomquist Race Car he began driving this season. "For us to come down here and win the inaugural Red Farmer Classic, that is really cool. This is one I will put on top of the trophy case for sure."

The fifth-starting Johnson settled for second on a track that narrowed up as the race wore on while Wendell Wallace of Batesville, Ark., held off a trio of Talladega Short Track regulars for the third spot. Former track champions Danny Peoples of Margaret, Ala., and Tim Busha of Boaz, Ala., rounded out the top five.

"I knew Ronnie was in second," Weaver said of his closest pursuer. "When I first started racing, he was about the only guy that would talk to me and help me some. We have a real cool relationship. I knew that he was going to be strong, we wanted to try and keep him by about two car lengths from me — my guys were giving my signals."

At the drop of the green, Weaver pulled away to leave Wallace, Johnson and Busha battling for second. Johnson emerged with the spot on the fifth lap and stuck a nose under Weaver by lap eight. Three laps later, Weaver edged away, stretching out his lead to almost two seconds.

After Neil Baggett's lap-14 spin drew a yellow, Weaver resumed his control of the race, leading by 2.5 seconds by lap 23.

As the frontrunners approached lapped traffic on lap 27, Johnson closed the gap in picking off lapped cars quicker than Weaver. They dueled over the next six laps with Johnson beating Weaver to the start-finish line by a nose on lap 33, but the low-running Weaver went back ahead on the next lap.

Weaver had a two-lapped car cushion near the midpoint with Johnson held up behind Bo Shirley, but a lap-50 caution erased Weaver's half-straightaway lead.

"On the lap-50 caution, it seemed like my car got really good and they (crew) kept telling me I was opening up, and I didn't know that I had the lead that I had," Weaver said. "It is just good to be running smooth laps, get a rhythm and click some of those laps away. I mean, 97 laps is a long time, so it worked out really well."

With Weaver in control out front in the second half of the race, the battle for third raged behind him with Wallace facing challenges from TST regulars. With 25 laps remaining, the top six drivers raced single file with Weaver maintaining a healthy lead over Johnson. As the lead increased to four second, Johnson fell into the clutches of Wallace, Busha and Peoples, who took the third spot on lap 85.

Weaver was cruising with a half-track margin when the final caution appeared for a slowing Tim Roszell on the 94th lap. Johnson couldn't make a move on the final restart and Weaver completed the victory.

Notes: Randy Weaver's Bloomquist Race Car is powered by Race Engine Design and sponsored by BKW Disaster Recovery & Rebuilding, The Bailey Company, VP Racing Fuels and Gunter Drywall. ... The victory ranks near Weaver's $10,000 triumph in the 2005 Blue-Gray 100 at Cherokee Speedway in Gaffney, S.C. ... The checkered flag fell on the 36-minute feature race at 10:24 p.m. and was slowed by just three cautions. ... Caution laps were counted up to the 50th lap. ... Ten cars finished on the lead lap as Weaver encountered lap traffic on lap 11. ... Race honoree and NASCAR legend Red Farmer finished eighth in the Crate Late Model feature, but elected to skip Super Late Model action after he aggravated a wrist injury. Farmer's grandson, Lee Burdett, drove his No. F97 and picked up the last transfer spot in a consolation race; he retired early in the main event. ... Late entry Eric Turner of Springfield, Mo., unloaded his No. 99T car and started from the back of the field in a consolation race after missing the first night's action. Larry Boutwell of Baker, Fla., overtook Turner with two laps remaining, denying Turner a spot in the main event. ... Dingus Griffin of Alexandria, Ala., was sporting a knee brace after having recent knee surgery because of an ATV accident. He finished eighth in the main event. ... Among other drivers failing to make the feature: Royce Bray, Dwayne Britton, Klint Byars, Chris Jones, Earl Smith and Stacy Taylor. ... Adam Martin won the Crate Late Model feature and Josh Adkins won the sportsman feature. ... The next Super Late Model special at Talladega comes July 31 for the Southern All Star-sanctioned Mike Head Jr. Memorial, which pays $5,400 to the winner.