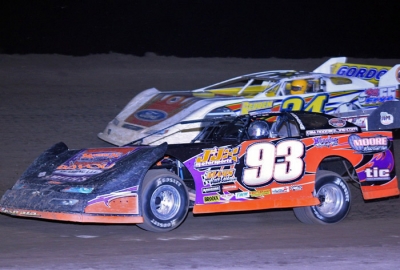 Returning from a layoff, Moore coasted to a 2.5-second victory over Rob Litton of Alexandria, La., and Kevin Sitton of Baytown, Texas, in the 50-lapper, his 11th career SUPR victory. The 11th-starting Moore patiently worked toward the front through the first half of the main event, making the winning pass on lap 23. A lap-44 caution gave Litton and Sitton one more shot at Moore to no avail.

"It took me a long time to get the feel back into the car that I was looking for tonight, especially since we haven't raced in four weeks," said the 28-year-old Moore, who notched his fifth special event victory at Greenville in the past three seasons. "The car felt good in the heat race, but I felt just rusty behind the wheel. I knew if I got out there and started racing it would come back and we starting picking them off about halfway through."

Litton, who led briefly on lap 10 and again on lap 17, settled for the runner-up spot while Sitton, who led 20 of the first 22 laps, was third. Ninth-starting David Ashley of Zachary, La., ran as high as third before settling for fourth while Kyle Cummings of Haughton advance three spots to finish fifth.

Sitton led the race at the outset with Robbie Stuart taking second from Allen Tippen with a power move on the first lap. After an early caution, Sitton was pacing Stuart when Stuart spun on the 10th lap, then rejoined the field on the tail.

After a third yellow, Litton began stalking Sitton while Ashley was up to third as they frontrunners pulled away from the field. Moore, meanwhile, was picking his way forward and grabbed the fourth spot from Tippen on lap 20.

Moore began clicking off competitors at the rate of one per lap, taking control before the halfway point and edging away from the Litton-Sitton battle for second. A fifth-running Ronny Adams brought out the final caution with six laps remaining, erasing Moore's two-second lead, but Moore quickly resumed his dominance over the final laps.