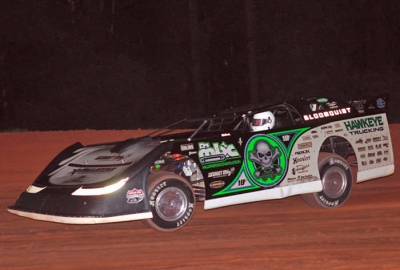 WAYCROSS, Ga. (May 8) — Taking the lead when Billy Moyer rolled a left-rear tire off the rim on the sixth lap, Hall of Famer Scott Bloomquist of Mooresburg, Tenn., dominated the rest of the unsanctioned Battle of the Swamp at Waycross Motor Speedway for a $10,000 payday. | Video | Slideshow

Bloomquist was unchallenged by runner-up Jonathan Davenport of Blairsville, Ga., in taking the checkered flag at the half-mile oval in southeastern Georgia that switched from an oil-packed surface to red clay for the 2010 season.

"We had a couple of little handling issues today that we worked on today, and ended up hitting it on the money. The car was perfect tonight. I can't say enough," said the third-starting Bloomquist, who finished second in a Friday night heat race. "We weren't having to push the car too hard to keep up (with Moyer early), so I was pretty confident we had the race. On restarts we were strong, and I felt pretty confident. I guess he must've cut a tire down."

Davenport, who started outside the front row, finished second followed by Chris Madden of Gray Court, S.C., winner of the previous Super Late Model special held at Waycross more than 10 years ago. Fast qualifier Ivedent Lloyd Jr. ended up fourth in the main event. Moyer, of Batesville, Ark., started on the pole and controlled the race's early stages before his tire problems.

"I think the track kinda fooled us there a little bit. It was real slimy in hot laps, and I thought it was actually going to get more grip later on in the night," Davenport said. "But it slicked off a little more than I thought it'd be. Maybe we chose the wrong tires, I don't know. We had a gameplan when we woke up this morning and we stuck with it. We came home in second place, which ain't too bad. We slowed down from yesterday. We really thought we had a car that could win. Scott was just phenomenal."

Notes: Bloomquist's self-designed race car is sponsored by Hawkeye Trucking, Miller Bros. Coal, Allstar Performance, Arizona Sport Shirts and Hoosier Racing Tires. ... Bloomquist's previous victory at Waycross came on Feb. 21, 1998, in Hav-A-Tampa Dirt Racing Series competition. ... Nine drivers completed 50 laps and 12 cars were running at the finish. ... Casey Roberts exited on the 13th lap. He had a flat tire and later a brief engine compartment fire. ... Mark Whitener earned $3,000 for a victory in the Limited Late Model division. ... April Farmer broke two fingers when she hooked a rut and the steering wheel jerked, injuring her hand. ... Besides its weekly Limited Late Model racing, Waycross has a pair of touring events remaining on its 2010 schedule. The National Late Model series visits on July 17 and the United Dirt Late Model Challenge Series visits on Aug. 7. Both races pay $3,000 to the winner.