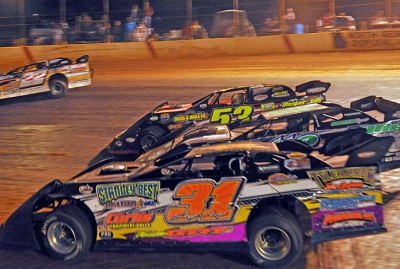 It was three-wide for the lead with five to go. (mikessportsimages.com)

CHATSWORTH, Ga. (May 8) — Polesitter Ray Cook led every lap at North Georgia Speedway, but he had his hands full with Randy Weaver and Arp in the closing laps of Saturday's Southern All Star Racing Series event.

The trio was three-wide exiting turn four with five laps remaining, but Cook edged away in the final laps for his first series victory since 2008. Cook earned $5,000 for a victory at the third-mile track just over the mountains from his Brasstown, N.C., home. | Slideshow

"I had no idea we were three-wide there," Cook said. "I was just so focused on running my line and keeping the car moving forward. I know it was exciting for these fans. These guys did a great job with the track and we are just happy and blessed to be here."

Reigning series champ Weaver, the Crossville, Tenn., driver who rallied from the 10th starting spot, was second with front-row starting Arp of Georgetown, Tenn., in third. Hometown driver Derek Ellis and Hall of Famer Freddy Smith of Seymour, Tenn., rounded out the top five. All-time winningest series driver Ronnie Johnson of Chattanooga, Tenn., ran second early in the race but headed pitside with a broken axle before the race's midpoint.

Weaver was fortunate to finish second after a 360-degree spin late in the race while battling up front. Because he was able to continue without stopping — but the yellow flag was displayed — series officials reset the field on the restart with Weaver in second. He was visibly disappointed with falling one spot short.

“You know I was really wanting to win that race. My good friend (and former car owner) Calvin Cheek passed away earlier this week and I really wanted to win that one for him," Weaver said. "I probably tried a little too hard."

Notes: Cook’s D&R Motorsports MasterSbilt Race Car has a Race Engine Design powerplant and sponsorship from Hicks and Ingle, A+ Moving and Storage and GW Performance. ... Cook's ninth career series victory was his first at North Georgia; his previous series victory came Aug. 9 at Toccoa (Ga.) Speedway. ... Runner-up Randy Weaver began his weekend in an unsanctioned event at Waycross (Ga.) Motor Speedway. Motor problems sent him back home where the team made repairs and headed to North Georgia. ... Scott Creel leads the series points over Freddy Smith. ... Jeff Franklin advanced from his 16th starting spot to finish eighth. ... The race was slowed six times for five cautions and for a red flag for a flipping accident by Preston Graves; he wasn't injured. ... The checkered flag fell at 10:45 p.m. ... Next up for the Southern All Stars is a May 22 event at Cleveland (Tenn.) Speedway paying $5,000 to the winner.