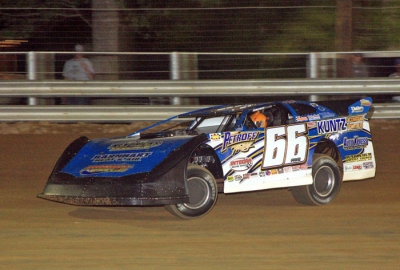 The third-starting Frye survived an early battle with Rob Litton of Alexandria, La., taking the lead for good on the 11th lap of the 30-lap victory. Litton tangled with Kyle Cummings in the late stages, helping the 12th-starting Mack to move up to the second spot. A high-running Kenny Merchant of nearby West Monroe improved seven positions to finish third ahead of 13th-starting Jon Mitchell of Texarkana, Texas, and Kyle Beard of Trumann, Ark.

"Rob Litton was good right around the hub. He slid up one time and gave me a little bit of a hole there," the 49-year-old Frye said. "The racetrack was really a lot better than I expected it to be. On a new racetrack, you know you always kind of wonder, but they had a good racetrack. It was racy in the heat. In the feature, it wasn't quite as good, but like Joey Mack came from 12th-to-second. It was a good show!"

Litton jumped into the lead at the outset with Frye challenging him as the top two broke away from third-running Clay Fisher. Frye worked under Litton on the 11th lap while Cummings took third from Fisher.

Frye began negotiating lapped traffic on the 14th circuit, and by the midway point, he'd extended his lead over Litton to 2.5 seconds. One lap later it was erased by a caution for Jeremy Glasgow.

Frye stretched his lead again on the restart while Litton and Cummings gave chase. The drivers battling for second tangled in turn one on the 19th lap to draw another caution, and both restarted on the tail.

Mack, who restarted third, took the second from Jeff Floyd while Frye pulled away again. Floyd faded out of the top five by lap 26 while Frye was on cruise control, heading for a victory that etched his name in the 2-month-old track's history book.

Notes: Frye's Rocket chassis is powered by Kuntz & Company and is sponsored by Vita Tub, Petroff Towing, O.H. Hendricks and Integra Shocks & Springs. ... Frye's fifth career MSRA victory puts him in a three-way tie for the most in the series with Kyle Beard and Wendell Wallace. ... Frye's previous MSRA triumph came July 24, 2009, at Batesville (Ark.) Motor Speedway. ... The 27-minute feature, slowed by four cautions, ended just past midnight. .... The 34 teams were from seven states: Arkansas, Illinois, Louisiana, Mississippi, Missouri, Tennessee and Texas. Cory Daugherty of Blue Mound, Ill., made a 620-mile trip for the race. ... Reigning MSRA champion and points leader Billy Moyer Jr. of Batesville, Ark., was forced to a backup car after suffering a rocker arm problem in his primary car's engine. Moyer won a consolation race and finished 13th in the main event. ... Shane Stephens of Arlington, Tenn., scratched from his heat race to make a water pump change. Stephens returned to run a consolation race, but failed to transfer into the feature. Other drivers failing to make the feature: Wesley Chandler, Wesley Crutchfield, Josh Danzy, Bobby Derryberry, Stormy Derryberry, Shane Harris, Terry Henson, Jon Kirby, Skip O'Neal, Eddie Provence, Shane Stephens, Bryan Sugg, Eddie Taylor and Allen Tippen. ... A bizarre event occurred between heats three and four. Ronny Adams of Greenwood, La., was exiting the speedway upon completing the third heat while Skip O'Neal of Midlothian, Tex., was entering the track for the fourth heat. They collided at the pit entrance with the Adams car atop O'Neal. Track crews carefully separated the two. Adams went on to finish 11th in the feature, while O'Neal fell two spots short of making the field from his consolation race. ... The race was a makeup from the previous Friday's rainout, and rain threatened the event, again. A 15-minute shower fell between the heat and consolation races, and drivers said the rain improved track conditions for the main event as officials pushed up Late Models in the program because of the delay. ... After picking up the last transfer spot in the final consy, Timothy Culp of West Monroe, battled mechanical issues on the parade lap after driver intros. Culp was pushed from the track and was unable to take the green flag for the feature. ... MSRA competitors complete a doubleheader weekend Saturday at 67 Speedway near Texarkana, Ark.